The tentative deal comes just days after the Canadian company announced plans to lay off 40 percent of its global workforce. The offer price is below what BlackBerry was trading at before the layoff announcement.Analysts say that although BlackBerry's hardware business is not worth anything, the company still owns valuable patents. 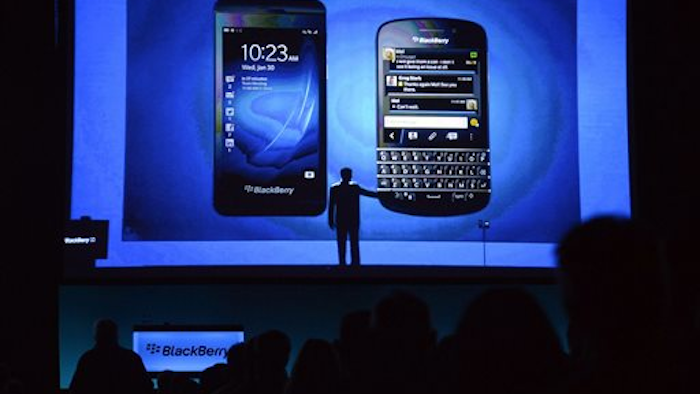 TORONTO (AP) -- BlackBerry's largest shareholder has reached a tentative agreement to pay $4.7 billion for the troubled smartphone maker, even as many investors fret about its potential demise.

BlackBerry Ltd. said Monday that Fairfax Financial Holdings Ltd. has signed a letter of intent that "contemplates" buying the company for $9 per share in cash in a deal that would take the company private. The tentative deal comes just days after the Canadian company announced plans to lay off 40 percent of its global workforce. The offer price is below what BlackBerry was trading at before the layoff announcement.

Analysts say that although BlackBerry's hardware business is not worth anything, the company still owns valuable patents. Patents on wireless technologies have exploded in value in recent years, as makers of the iPhone and various Android devices sue each other. Having a strong portfolio of patents allows phone makers to defend themselves and work out deals.

BlackBerry is also strong in having total cash and investments of about $2.6 billion, with no debt, though it's burning through that stockpile. In just the past few months, it's spent about half a billion dollars.

The possible BlackBerry deal follows a $7.2 billion offer that Microsoft Corp. made this month for the phones and services business of another troubled phone maker, Nokia Corp. Last year, Google Inc. paid $12.4 billion for another fallen pioneer, Motorola Mobility, mostly for its patents.

The BlackBerry, pioneered in 1999, was once the dominant smartphone for on-the-go business people and other consumers. It could be so addictive that it was nicknamed "the CrackBerry." President Barack Obama couldn't bear to part with his BlackBerry. Oprah Winfrey declared it one of her "favorite things." But then came a new generation of competing smartphones, starting with Apple's iPhone in 2007. The BlackBerry, that game-changing breakthrough in personal connectedness, suddenly looked ancient.

Although BlackBerry was once Canada's most valuable company with a market value of $83 billion in June 2008, the stock has plummeted to less than $9 from over $140 a share, giving it a market value of $4.6 billion, just short of Fairfax's offer.

BlackBerry shares plunged 17 percent Friday after the company announced a quarterly loss of nearly $1 billion and layoffs of 4,500 workers. It gained 9 cents, or 1.1 percent, to $8.82 Monday.

Fairfax head Prem Watsa, who owns 10 percent of BlackBerry, stepped down as a board member last month because of potential conflicts when BlackBerry announced it was considering a sale. If the proposed deal goes through, BlackBerry will no longer be traded publicly.

"We believe this transaction will open an exciting new private chapter for BlackBerry its customers, carriers and employees," Watsa said in a statement. "We can deliver immediate value to shareholders, while we continue the execution of a long-term strategy in a private company."

Watsa is one of Canada's best-known investors and is the billionaire founder of Toronto-based Fairfax Financial Holdings Ltd. BlackBerry founder Mike Lazaridis recruited Watsa to join the company's board when Lazaridis and Jim Balsillie stepped aside as its co-CEOs in January 2012. Because Watsa was on the board, he likely has the best information on the value of its patents and other assets, said Mike Walkley, an analyst with Canaccord Genuity.

Watsa is likely to keep current CEO Thorsten Heins in the job should the deal happen. He said in April that he's a big supporter of Heins and has called his promotion the right decision. If BlackBerry is sold and Heins is ousted, though, the embattled CEO stands to receive $55.6 million in stock awards, benefits and other compensation, according to the company's proxy statement filed in May.

BlackBerry said the general terms of the deal have been approved by its board and a special committee set up to review options. The company said it will negotiate and execute a definitive transaction agreement with Fairfax by Nov. 4.

During that time, BlackBerry is entitled to shop around for other buyers, but if BlackBerry backs out of the deal, it would owe Fairfax about $157 million.

"The special committee is seeking the best available outcome for the company's constituents, including for shareholders," BlackBerry chairwoman Barbara Stymiest said in a statement.

Fairfax said it is seeking financing from Bank of America Merrill Lynch and BMO Capital Markets. The release didn't identify what other investors are involved.

Walkley believes the preliminary nature of the deal suggests his partners likely want to do due diligence with an option to back out. The announcement made no mention of any penalty should Fairfax back out.

"The deal is hardly definitive at this stage, said Eric Kirzner, a professor of finance at the University of Toronto. "There are so many questions about it. It looks clever and it looks like it may set off a flurry of activity, maybe some other white knights are going to come along," Kirzner said. "Maybe that's the intent of this, or maybe the intent is for Mr. Watsa to acquire the company but I just don't know."

"It's worth the paper it's written on," Gillis said. "It forces the hand for anyone else that might be interested."

Gillis said taking BlackBerry private is the right move and that it's possible that BlackBerry could survive in a much smaller form. He noted that the $9-per-share offer is lower than the $12.32 average price that the stock traded over the past six months.

Going private removes the burden of pleasing shareholders with short-term results, just as Michael Dell hopes to do with Dell Inc. after winning a bid to take the troubled computer maker private, said Anthony Michael Sabino, a professor at St. John's University's business school. He said Fairfax is known for patience in its investments, which would give BlackBerry time to regroup.

"In all honesty, its fate is still uncertain, but at least now it has a fighting chance," Sabino said.

This year's launch of BlackBerry 10 and fancier devices that use it was supposed to rejuvenate the brand and lure customers. But the much-delayed phones have failed to turn the company around. At their peak in the fall of 2009, BlackBerry's smartphones enjoyed global market share of more than 20 percent, Walkley said. That is now just 1.5 percent.

The decline of BlackBerry, formerly known as Research In Motion Ltd., is evoking memories of Nortel, another Canadian tech giant, which ended up declaring bankruptcy in 2009.