Ford Automotive has unveiled what it says is an industry-first detection technology that uses high-resolution cameras to detect and eliminate dirt particles on a freshly-laid coat of paint. The company’s F-Series trucks are the latest vehicles to benefit from the technology, which Ford claims can detect particles smaller than a grain of salt. 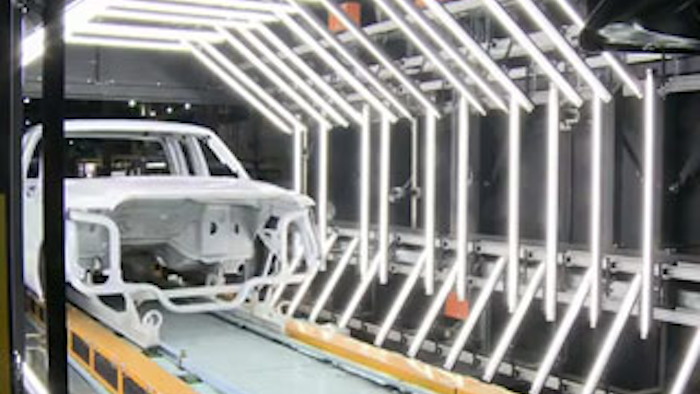 Dearborn, Mich. (Manufacturing.net) — Ford Automotive has unveiled what it says is an industry-first detection technology that uses high-resolution cameras to detect and eliminate dirt particles on a freshly-laid coat of paint. The company’s F-Series trucks are the latest vehicles to benefit from the technology, which Ford claims can detect particles smaller than a grain of salt.

The system takes microscopic scans of every painted surface on the vehicle, using varying degrees and angles of light to identify dirt and other irregular paint conditions. 3,150 images are captured for every vehicle, in a short 15-second window, which are then stitched together into a full 3D image that is compared, at a very fine level, to a “perfect” computer model. In the past, the company inspected paint and surfaces with the human eye alone. Now, the system automatically alerts operators where to polish and buff out imperfections.

And it seems to be working — Ford says paint quality is better than ever, and customer complaints were reduced by 82 percent within one year.

A video of the process is embedded below: