A new robot at the University of Pennsylvania has a leg up on its predecessors now that researchers have outfitted it with jumping and climbing abilities — something that could make it particularly useful for such tricky propositions as military search missions or supply transport. 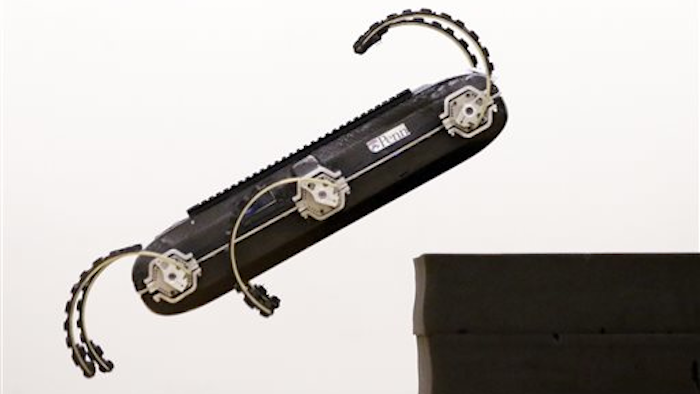 PHILADELPHIA (AP) -- A new robot at the University of Pennsylvania has a leg up on its predecessors now that researchers have outfitted it with jumping and climbing abilities — something that could make it particularly useful for such tricky propositions as military search missions or supply transport.

The RHex robot project began about 15 years ago when researchers at several universities began asking what it would take for robots to traverse rugged terrain as well as animals do.

"You look at any machine that's been built today, and almost any animal that you can imagine will outperform that machine," said Penn engineering professor Daniel Koditschek, who's been involved in the development of RHex (pronounced Rex) since the beginning.

Legged robots, unlike wheeled ones, have the animal-like ability to overcome obstacles like stairs and ledges. But until the latest iteration of RHex, developed by Koditschek and fifth-year doctoral student Aaron Johnson, legged robots couldn't negotiate gaps in terrain any better than robots with wheels.

"Quite frankly, what the leg robots were doing was going over terrain that a good wheeled robot could probably handle," said University of Michigan engineering professor Jessy Grizzle. "What RHex is doing now is something that you couldn't imagine doing with wheels."

Johnson has developed mechanisms that allow the robot to jump over gaps and holes in terrain that it previously would have fallen into. And where tall ledges would typically block such a robot's path, RHex can maneuver onto platforms more than four times its own height.

"Those are the things that are just kind of blowing our minds," Grizzle said. "It can do multiple types of missions now, and that's pretty cool."

Koditschek and Johnson designed the latest version of RHex — X-RHex Lite — using lightweight carbon fiber. This allows it to perform its leaping and climbing functions without consuming too much power, so the robot can keep moving after clearing an obstacle.

The RHex project was originally funded by the Department of Defense division that's in charge of developing military technology, and the latest version is funded by the U.S. Army.

But according to Roger Brockett, a professor of engineering at Harvard University, there is a wide range of research happening in robotics, and it's difficult to know which approach will ultimately be the most useful.

"This is just one big quest from people all over the place who are trying to see if their particular take on this is going to be effective," he said. "It's unlikely that any of us have such a pipeline to God that we know which is going to be important in 10 years."