The defects and errors that led to the world's deadliest garment-industry accident extend from the swampy ground the doomed Rana Plaza was built on, to "extremely poor quality" construction materials, to the massive, vibrating equipment operating when the eight-story building collapsed. 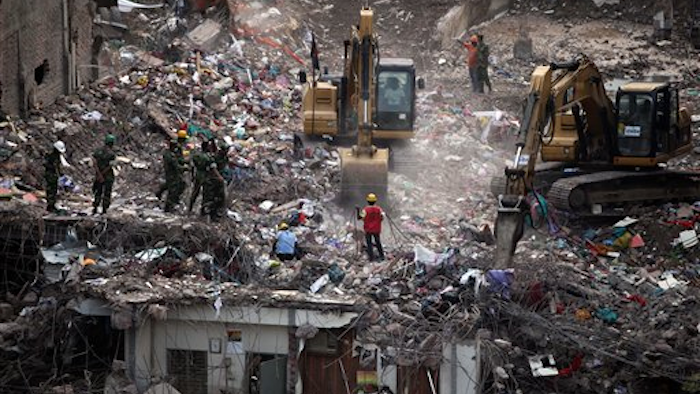 DHAKA, Bangladesh (AP) -- The defects and errors that led to the world's deadliest garment-industry accident extend from the swampy ground the doomed Rana Plaza was built on, to "extremely poor quality" construction materials, to the massive, vibrating equipment operating when the eight-story building collapsed, a committee appointed by Bangladesh's government concluded.

The committee recommended life prison sentences for the owners of the building and the five garment factories that operated there, though the charges they currently face carry a maximum seven-year term. Their report, submitted to the government Wednesday, says nothing about the role that an inadequate regulatory system played in the April 24 collapse, which left more than 1,100 people dead.

The disaster highlighted the hazardous working conditions in Bangladesh's $20 billion garment industry and the lack of safety for millions of workers who are paid as low as $38 a month. The 1,127 killed at Rana Plaza in the Dhaka suburb of Savar are among at least 1,800 Bangladesh garment-industry workers killed in fires or building collapses since 2005.

The investigating committee, appointed by the interior ministry, found that the ground Rana Plaza was built on was unfit for a multi-story building.

"A portion of the building was constructed on land which had been a body of water before and was filled with rubbish," committee head Khandker Mainuddin Ahmed said. He said the land had been swampy with shallow water.

The report also said the building was not built for industrial use, and that the weight of the heavy garment factory machinery and their vibrations contributed to the building collapse.

Some elements of the report, including problems with building materials and heavy equipment, were previously mentioned by investigators.

Rana Plaza was shut down briefly after workers spotted cracks in its walls and pillars a day before the collapse. But the garment factory workers were called back to work, many of them forcefully, hours before the building fell.

The committee recommended that Rana and the owners of the garment factories be sentenced to life in jail if they are found guilty of violating building codes. Rana, three engineers and four factory owners have been arrested, but the building-code charges they face carry a maximum sentence of seven years behind bars.

The committee also urged the government to ensure that all those injured at Rana Plaza receive free medical treatment. More than 2,500 people were rescued shortly after the disaster.

Labor activists are among those who have blamed not just the owners but the government for the disaster. Government inspections of garment factories are infrequent and easily subverted by corruption, and the garment industry, by far Bangladesh's biggest exporter, is highly influential in government.

The owner of a Bangladesh garment factory where 112 people died in a fire last year has not been charged, though his factory had three illegal floors and no emergency exits. After three anthropologists filed a petition claiming that the Nov. 24 fire resulted from Tazreen Fashions Ltd. owner Delwar Hossain's negligence, Bangladesh's High Court asked authorities to bring Hossain before the court on May 30, and to bar him from leaving the country.

Since the disaster, many international clothing retailers have signed on to a five-year, legally binding contract that requires them to help pay for fire safety and building improvements in Bangladesh. Most American brands have not; the National Retail Federation is leading a coalition of North American retail and apparel groups to develop an alternative broader proposal that would go beyond Bangladesh.