While the new BlackBerry 10 software will be offered on devices with physical keyboards in the future, the company is betting heavily on touchscreens. 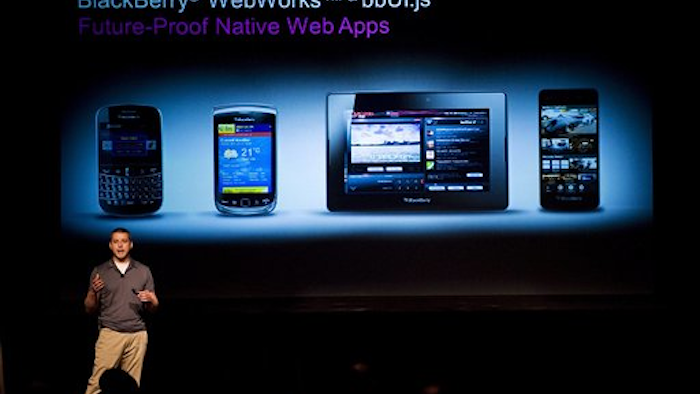 TORONTO (AP) — The first BlackBerry device running Research In Motion Ltd.'s new operating software will not have a physical keyboard, only a touch-screen one.

The BlackBerry 10 software will be offered on devices with physical keyboards in the future, but RIM spokeswomen Rebecca Freiburger declined to say when. RIM is expected to start selling BlackBerry 10 touch-screen devices this year.

Many corporate users have stuck with the BlackBerry solely because of its physical keyboard, given a perception that it's harder to type emails on a touch screen. The BlackBerry 10 system has already been delayed about a year, and with additional delays to get a physical keyboard, those people may not be willing to wait any longer, especially as the iPhone makes greater in-roads in corporate settings. Those users may simply get the new iPhone expected this fall.

RIM's hopes hang on the BlackBerry 10 system, which is meant to offer the multimedia, Internet browsing and apps experience customers now demand. The Canadian company is preparing to launch the new software later this year, just as North Americans are abandoning BlackBerrys for iPhones and Android devices.

Colin Gillis, an analyst with BGC Financial, called it puzzling that RIM isn't leading with its strength by releasing a keyboard BlackBerry first.

"The physical keyboard is the most dominant item that separates out Research In Motion from its competitors," Gillis said. "If you are not playing to your historical strengths you may find it more difficult to get traction."

Gillis said there is a spot in the market for RIM but the company "just got to get it together."

But Jefferies analyst Peter Misek said BlackBerry 10 is all about touch and closing the gap with Apple, so people should not be surprised that the initial model will have only a touch screen.

"They are going to build a BlackBerry device with a keyboard, but it's just going to take longer," Misek said. "Maybe it will come a month or two after, but frankly it might be already too late."

RIM once dominated the corporate smartphone market but failed to adapt to the emerging "bring your own device" trend, in which employees use their personal iPhones or Android devices for work instead of relying on BlackBerrys issued by their employers. As the movement caught on, the iPhone made the BlackBerry look ancient.

RIM's future is far from certain as its flagship devices rapidly lose market share to flashier phones. With more than $2 billion in cash, bankruptcy seems unlikely in the near term. But RIM's U.S. share of the smartphone market fell sharply from 44 percent in 2009 to 10 percent in 2011 according to market researcher NPD Group.

RIM said Wednesday it has started laying off employees as part of a restructuring plan aimed at saving about $1 billion this year.