It attempts to take advantage of one of the few criticisms of Apple's iPad — that it is better for consuming content than creating it. 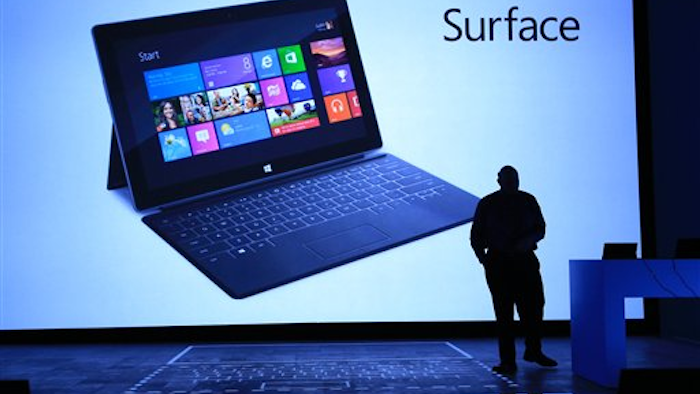 LOS ANGELES (AP) — Microsoft unveiled a new tablet computer, Surface, that attempts to take advantage of one of the few criticisms of Apple's iPad — that it is better for consuming content than creating it.

The software maker said Monday that its device will attach to a removable rubberized keyboard that also acts like a book cover. CEO Steve Ballmer said Surface will be an entertainment device "without compromising the productivity that PCs are uniquely known for."

Microsoft Corp.'s broadside against the iPad is a dramatic step to ensure that its Windows software plays a major role in the increasingly important mobile computing market.

"They are saying it's a different world now and are trying to put the sexy back into the Microsoft brand," said Gartner Inc. analyst Carolina Milanesi.

Microsoft is linking the Surface's debut with the release of its much-anticipated Windows 8 operating system, which has been designed with tablets in mind. The company hasn't specified when Windows 8 will hit the market, but most analysts expect the software to come out in September or October.

One version of the Surface, which won't go on sale until sometime in the fall, is 9.3 millimeters thick and works on the Windows RT operating system which was made for tablets that run on low-power chips designed by British chipmaker ARM Holdings PLC.

It comes with a 0.7-millimeter thick kickstand to hold it upright and a 3-millimeter-thick touch keyboard cover that snaps on using magnets. The device weighs under 1.5 pounds.

The size is similar to the latest iPad, which is 9.4 millimeters thick and weighs 1.3 pounds.

Surface has a screen that measures 10.6 inches diagonally, compared to 9.7 inches for the iPad, but it comes in the 16:9 aspect ratio, which is suited to watching video in the widescreen format. The iPad's screen size ratio is 4:3.

Microsoft said the Surface's price tag will be similar to the iPad, which sells for $499 to $829, depending on the model.

A slightly thicker version — still less than 14 millimeters thick and under 2 pounds — will work on Microsoft's upcoming Windows 8 Pro operating system and cost as much as an Ultrabook, the company said. The pro version comes with a stylus that allows users to make handwritten notes on documents such as PDF files. It will be released about three months later.

The touch keyboard resembles the lightweight "Smart Cover" that Apple Inc. sells for $38, but comes with a full QWERTY keyboard. It is rigidly flat instead of foldable. A slightly thicker keyboard with depressable keys will also be available.

Although the Surface looks like an elegant device, Forrester Research analyst Sarah Rotman Epps criticized Microsoft for not using attention focused on Monday's announcement to highlight some of the reasons that it might be a better option than the iPad. For instance, she thinks Microsoft could have shown how its video calling service, Skype, will work on Surface or how people might be able to use its motion-control sensor, Kinect, on the tablet.

"I am excited about this product, but it felt like Microsoft was pulling punches with this announcement," Epps said. "Hardware is only part of the dynamic. They need to explain how Microsoft manufacturing this device will change people's experience with a tablet."

Microsoft also may be limiting the Surface's impact by limiting the initial sales to its own stores and online channels.

The foray into hardware is unusual for Microsoft, which relies on manufacturers like Hewlett-Packard and Dell, and could cause friction. Ballmer said the company, at times, needs to push hardware makers "in ways even that the makers of the hardware had yet to envision."

He said the tablet was as essential to the upcoming Windows 8 operating system as the mouse was for the first version of Windows.

"Much like Windows 1.0 needed the mouse to complete the experience, we wanted to give Windows 8 its own companion hardware innovation," he said.

The more hands-on approach may upset some manufacturers.

Nomura analyst Rick Sherlund said Microsoft will have to assure longtime manufacturing partners that it is competing fairly with them.

"Microsoft will need to assure them it's a level playing field," he said. "I think this sets a high bar for their partners."

Microsoft has been making software for tablets since 2002, when it shipped the Windows XP Tablet PC Edition. Many big PC makers produced tablets that ran the software, but they were never big sellers. The tablets were based on PC technology, and were heavy, with short battery lives.

Microsoft didn't say how long the Surface would last on battery power.

It won't be the first time Microsoft has ventured into hardware. And the Surface won't be its first computer, in the broad sense. The successful Xbox game console is essentially a PC designed to connect to a TV and play video games.

Microsoft has also made its own music player, the Zune, and a line of phones, the Kin. In both cases, it produced these products after hardware partners had failed to produce competitive products with Microsoft's software.

Both products were failures. The Zune gained favorable reviews when it launched in 2006, but still couldn't hold its own against the iPod, and was discontinued last year. The Kin phones were panned and pulled from shelves within two months of their launch in 2010.

The Xbox, on the other hand, didn't tread on the toes of any Microsoft partners. Launched in 2001, it has made Microsoft a major player in console gaming, alongside Sony and Nintendo. But it was a money-loser for many years, and while it's been profitable more recently, it's only marginally so, especially when compared to Microsoft's lucrative software business.