Why IoT Implementation Begins With Mobile

IoT is no longer just a phrase tossed around during annual board meetings — it’s now a requirement for today’s successful, modern manufacturer. 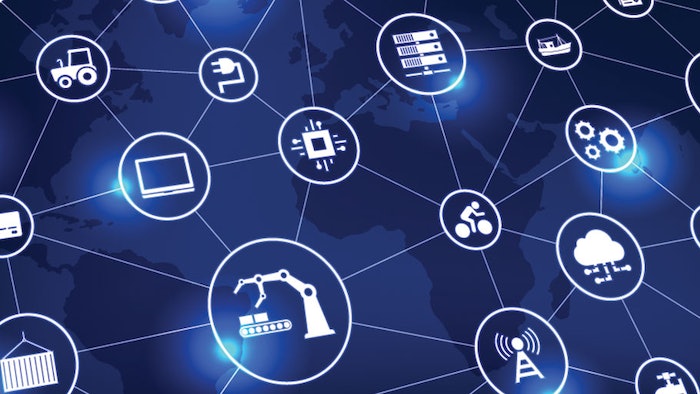 In less than two years, IoT has gone from unfamiliar acronym to the latest buzzword for companies in almost every industry worldwide. And while IDC projected that international Internet of Things (IoT) spending would exceed $800 billion in 2017, future investment is expected to nearly double, totaling $1.4 trillion in only three short years (2021).

In manufacturing, IoT-enabled applications and technology have driven the entire production process towards a more interconnected — and more lucrative — operation.  That said, IoT is no longer just a phrase tossed around during annual board meetings — it’s now a requirement for today’s successful, modern manufacturer.

But for many, the biggest challenge to IoT adoption is simply not knowing where to start. Although advanced robotics and artificial intelligence will play a role in Industry 4.0 and the manufacturing floor of the future, these advancements can be overwhelming to those that still have workers relying on paper-based processes. For these companies, the first step towards IoT-ready operations should instead be investing in scalable technology devices, like mobile devices, that workers can start using immediately — whether on foot or on forklift.

A recent survey revealed that manufacturers that have already started successfully leveraging IoT technology in plants reported 72 percent increased productivity and 69 percent experienced increased profitability. However, only one-third of manufacturers reported that they have an IoT application strategy in place that’s currently being implemented. The other two-thirds say they have a strategy in place that has yet to be implemented or have yet to develop a strategy altogether.

What’s causing the hold up? For starters, some manufacturers still equip their workers with paper-based production orders and instruction manuals which causes delays in task completion and forces workers to split their time between the manufacturing floor and computers in the back office. Outside of the challenge of digitizing orders, the next major challenge is bridging the gap between the way that workers interact with both current and new IoT-enabled manufacturing hardware. The last thing manufacturing executives want is to invest in the technology, and the time it takes to help workers operate today’s devices, only for that tech to become obsolete in a few short years as newer technology becomes essential to completing daily tasks.

Manufacturers need a way to effectively adapt to IoT advancements at a pace that makes sense for their business. The ultimate goal of incorporating new technology is to increased productivity and profitability for years to come, not lose money and time to implementation and education. Therefore, the most logical approach is to start their digital transformation by putting the power of mobile technology into the hands of their most important assets — their workers. This will truly advance operations, giving workers the tools they need to ensure that they can access software and back-office systems throughout all areas of the manufacturing environment. With mobile technology, manufacturing managers and workers are able to initiate the IoT transformation, and make operational decisions from anywhere, based on real-time, actionable data, allowing them to be more efficient, productive and adaptable to future technology advancements.

Many manufacturers have started equipping workers with mobile devices that enable them to access up-to-date, IoT-derived data as they transition from office environments, to the forklift and eventually to the floor without any downtime. But because of the inherently rough nature of the manufacturing floor, mobile technology must be tough, such as rugged tablets, in order to withstand drops and dust typically encountered in warehouse environments. Sleek, consumer-grade devices may suffice in keeping a pulse on operations in a controlled setting such as a retail store, but in the manufacturing environment, where consistent systems performance is the key to operational vitality, rugged reliability trumps aesthetics. For example, if a roving production manager drops the consumer-grade tablet while counting inventory during their peak production schedule — the asset is destroyed and productivity is lost.

Today’s rugged tablets can offer all of the conveniences offered by consumer-grade devices, but with a protective design that offers much more longevity. When paired with the right ERP platforms and software applications, every sector of manufacturing stands to benefit from by equipping employees with rugged computing tools, including industrial manufacturing, automotive assembly and even food processing operations.

For example, the world’s largest sesame seed processor, Haitoglou Bros. SA, needed to digitize its paper-based processes for coordinating inventory and supply chain distribution in order to service a growing customer-base efficiently and effectively. Because of delayed data distribution and disparate reporting inputs that required employees to transfer information from the processing floor to back-office desktops, it was nearly impossible to make real-time adjustments to production levels, which contributed to longer lead times for shipment of processed goods. To meet increased production demands, managers needed to have total visibility into Haitoglou’s multi-faceted business so they could view current customer orders, manage supply levels, coordinate distribution schedules, troubleshoot equipment issues, and mitigate quality control issues. However, the disconnected model for inputting processing and production information prevented the sesame processor from truly leveraging the power of information offered by the IoT.

To streamline workers’ day-to-day tasks and modernize its organization as a whole, Haitoglou invested in Windows-based rugged tablets with future-proof software and powerful Intel processors. Not only was the rugged tablet solution tough enough to withstand Haitoglou’s operating environment, but it was also able to be seamlessly implemented and scalable to allow for future changes in its processing technology. The rugged tablets have also automated workflows, making it possible to complete data entry procedures up to 50 percent faster.

Regardless of whether or not organizations have already started the process of digitizing processing and warehousing, manufacturers can achieve similar results to Haitoglou Bros SA by simply putting rugged mobile tablets in the hands of workers. The right rugged mobile devices will allow manufacturers to adopt IoT advancements, without disrupting their workers’ daily processes or prompting immediate and drastic technology overhauls in the future. Ultimately, rugged mobile tools have the power to transform today’s manufacturing workers into information workers that can be fully connected to actionable data whenever they’re on a forklift in the warehouse reviewing inventory levels or behind a desk coordinating distribution schedules for the next major order.

John Graff is Vice President of Marketing at Xplore Technologies.