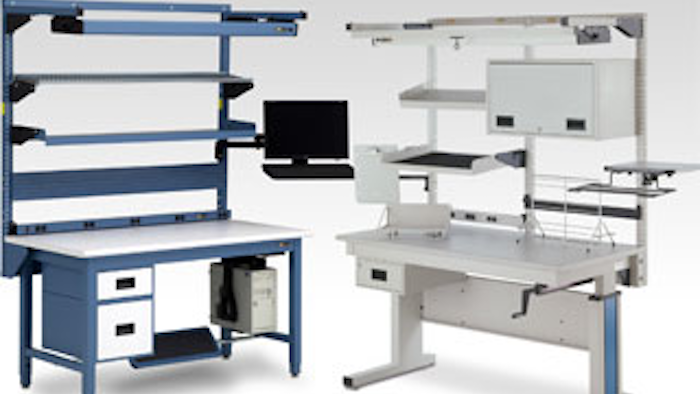 [[{"fid":"160483","view_mode":"media_original","type":"media","attributes":{"height":232,"width":320,"style":"float: right; margin-left: 5px; margin-right: 5px; border: 1px solid black;","alt":"Multi-Task Workbenches","title":"Multi-Task Workbenches","class":"media-element file-media-original"}}]]IAC Industries (Brea, CA) has introduced a new way to add storage and utility to workbenches with the company’s versatile Multi-Task System I and II (MTS-I and MTS-II ). IAC’s Multi-Task Systems (MTS) work with existing or new worksurfaces, are easily installed and retrofitted, and increase efficiencies. The MTS features heavy gauge vertical posts with a tie beam at the top of frame for increased support. The MTS-I , a three post system, provides two evenly divided side by side accessory mounting areas. The MTS-II , a two post system, allows for accessories that span the entire worksurface length. The MTS slots along the post are 1” increments and can be aligned or independently adjusted for maximum flexibility. Accessories include various shelving configurations, part cup rails, bin rails, electrical channels, cabinets, and isolation screens.