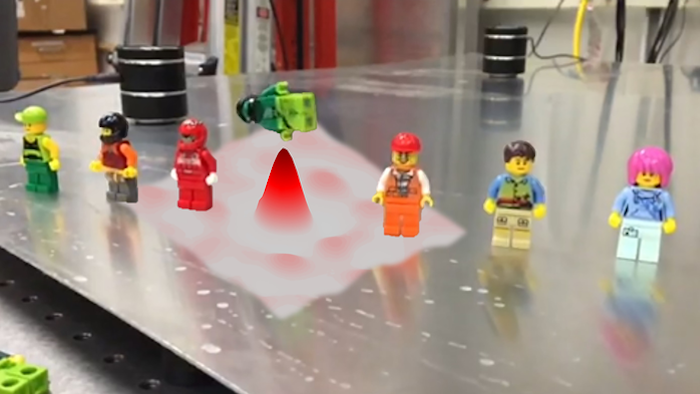 A tabletop covered in miniature Lego minifigures. There is a whooshing sound, a pause, and then a single minifigure in the center of the table topples over, leaving the remaining minifigures standing.

Brian Anderson, of Brigham Young University, and his team use speaker shakers to generate vibrations in a plate. They place Lego minifigures on the plate, choose a target, and measure the impulse response between each shaker and the target location. Playing that very response from the shakers, but reversed in time, creates sound waves that constructively interfere at the target minifigure.

The focused energy knocks over the single Lego minifig without disrupting the surrounding minifigs.

The demonstration was transformed into a two-player game for a museum exhibit in a wave propagation museum hosted by ETH Zurich in Switzerland. Two visitors take turns focusing vibrations and attempting to knock over the Lego minifigures on the other team.

The technique also has numerous applications beyond Lego, and Anderson said it shows the power of focused vibrations.

"Time reversal has been used to focus sound in the body that is intense enough to destroy kidney stones or brain tumors without requiring surgery," Anderson said. "I have used time reversal to locate cracks or defects with ultrasound in metal structures, such as storage canisters for spent nuclear fuel. Time reversal can also be used to locate and characterize earthquakes or locate gun shots within an urban city environment."

Anderson discussed the achievement, "Knocking over LEGO minifigures with time reversal focused vibrations: Understanding the physics and developing a museum demonstration," at the 181st Meeting of the Acoustical Society of America.