The report called for lawmakers to overhaul the state's condominium laws. 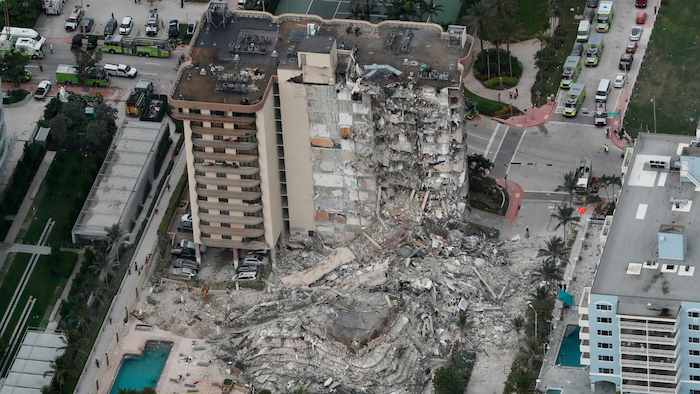 TALLAHASSEE, Fla. (AP) — Florida legislators should overhaul the state's condominium laws in the wake of the Surfside building collapse that killed 98 to address inspections, ensuring proper reserves are in place to make major safety repairs and other issues, according to a task force report prepared by a section of the Florida Bar.

The Real Property, Probate and Trust Law Section of the bar formed the task force bringing together lawyers specializing in condominium and association laws. The goal was not to investigate or find blame for the collapse of the 12-story Champlain Towers South beachfront condominium but rather to recommend ways to prevent future catastrophes.

“The lack of uniform maintenance standards or protocols, and the unguided discretion given to boards of directors to determine when, how, and if life safety inspections should be performed, requires legislative intervention,” concluded the 179-page report that was released earlier this week.

Champlain Towers was 40 years old and in need of major repairs when it collapse on June 24. It's led to officials looking at the need to ensure other aging structures are safe. The task force said 912,376 Florida condo units housing more than 2 million people are at least 30 years old, including more than 105,000 older than 50 years and nearly 328,000 built between 40 and 50 years ago.

Among recommendations are giving association boards the right to make special assessments for major repairs to protect resident safety without a full association vote. It also requires associations to build up reserves for such projects as recommended by engineers in order to be able to pay for repairs. Those would be in addition to accounts in place for routine maintenance.

While the report said the vast majority of condominium associations are operating in a reasonably safe manner, there needs to be more consistency with inspections and the information provided in them needs to be available to residents.

“Unit owners and boards may also resist such maintenance because of cost, lack of reserves, disruption and inconvenience,” the report said.

The report also recommends allowing condominium boards to borrow money to pay for life safety repairs so the cost could be spread out over years.

Local governments should also have a higher level of accountability for inspection reports, including stripping them of sovereign immunity protections, which limit civil claims against government agencies to $200,000.

Current law has limitations on associations and unit owners to take civil action against developers for design and construction flaws. Those limitations should be lifted, the report said.

The state division that oversees condominium education and compliance is largely funded by a trust fund built on a $4 per unit fee. The task force recommends the Legislature not be able to “sweep” the trust fund for other state budget purposes.

It also recommends that 30% of the trust fund be used to educate association boards and residents about obligations to make repairs to ensure buildings are safe.