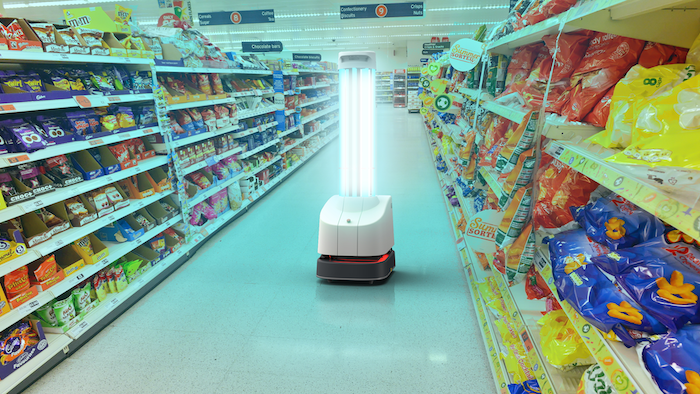 The average consumer spends about 60 hours grocery shopping per year. Hours spent in an environment that may harbor different germ colonies include shopping carts, refrigerator doors and produce.

After receiving the second order of 100 more robots from the European Commission in September, following the first order of 200 robots in November 2020, UVD Robots has entered a global partnership agreement with OCC Commercial Consulting to combat COVID-19 and high-risk pathogens commonly found in grocery, food service and retail environments.

The partnership enables OCC to deploy UVD Robots to autonomously disinfect store spaces including shelves, aisles and checkout areas. It provides a comprehensive infection prevention using germicidal UV-C lighting equipment against viruses and bacteria on surfaces and the air, killing more than 99.99 percent of microorganisms including SARS-CoV 2 (coronaviruses) and E. Coli.

“Disinfecting retail environments is the perfect job for UVD Robots as they can effortlessly navigate aisles after-hours,” said Claus Risager, CEO at Blue Ocean Robotics, the manufacturer of UVD Robots.

Initially, OCC Commercial Consulting will focus on deploying UVD Robots in the German markets but is planning to expand into rest of Europe.

“We are excited to provide UV disinfection robots with autonomous mobility to a market in great need,” said Salvatore Orto, founder of OCC Commercial Consulting, an agency. “Supermarkets must make their employees and customers feel confident that all that can be done to keep them safe and healthy is being done.”

Based on preset schedules and mapped routes, UVD Robots can decontaminate an estimated 700 square meters in about one hour, enabling rapid disinfection of typical retail layouts without requiring staff on site to administer it.

Disinfecting supermarkets with UV-C lights is not a new concept. The UVD Robot solves the challenges of shadowing and repositioning which have previously hindered the comprehensive application of UV-C disinfection, while providing 24/7 access to real-time compliance and efficacy reports of the disinfection procedures.