The state denied a key permit for the project earlier this year. 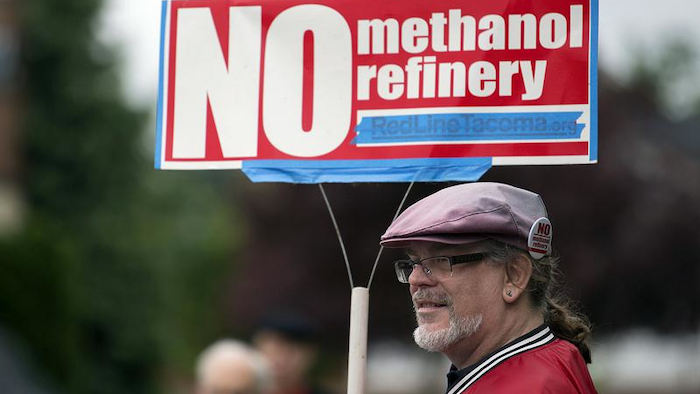 Mark Keely, of Kalama, Wash., stands with other protesters outside the Washington Department of Ecology's Vancouver field office in 2017.
Amanda Cowan/The Columbian via AP, File

SEATTLE (AP) — A company backed by the Chinese government on Friday ended its seven-year effort to build one of the world’s largest methanol plants along the Columbia River in southwestern Washington, following a series of regulatory setbacks and a long debate over its environmental footprint.

Northwest Innovation Works proposed a $2.3 billion project to take fracked natural gas from Canada and convert it into methanol, which it would then ship to China to make ingredients for plastics used in everything from iPhones to clothing to medical devices.

The state Department of Ecology denied a key permit for the project in January, saying it would create too much pollution and have negative effects on the shoreline. On Friday, the company notified the Port of Kalama it was terminating its lease, saying the regulatory environment had become “unclear and unpredictable.”

Economic development officials in southwest Washington blasted the state for dooming the project, saying that the company's methods of making methanol from natural gas would have been cleaner than making it from coal, as is done elsewhere. That would have benefitted the environment while creating 1,400 construction jobs and 200 family-wage permanent positions, they argued.

“NWIW did everything right, and their understandable decision to pull out of this project is a real loss for families trying to make ends meet, the future of economic development in our state, and our environment," Port of Kalama Commissioner Troy Stariha said in a written statement.

A review required by the state found that the plant would boost the amount of greenhouse gases released into the atmosphere, but not as much as if the methanol were made elsewhere.

Environmental groups, including Columbia Riverkeeper and the Washington Environmental Council, as well as tribal activists, vehemently opposed it. They celebrated the lease termination as the latest in a string of victories that helped block more than a dozen fossil-fuel developments in the Pacific Northwest, including fracked gas pipelines, liquefied natural gas terminals, coal export terminals, and oil-by-rail developments.

“Projects like this simply cannot go forward as we fight to save our climate,” Kristen Boyles, an attorney with the environmental law firm Earthjustice, said in a news release. “The climate-killing emissions from this project would have overwhelmed Washington, and we must keep drawing the line and saying no.”

The proposal had a roller-coaster history, with Democratic Gov. Jay Inslee initially supporting it and going so far as to visit Kalama to promote it. But in 2019, amid his climate-activist campaign for president, Inslee reversed himself, saying he could no longer in good conscience support massive fossil-fuel infrastructure projects.

Northwest Innovation Works suffered another setback that year when the state Department of Ecology demanded further environmental review, saying that five years in, its backers had failed to provide enough information about its greenhouse gas emissions and how they would be offset.

Last fall, a federal judge invalidated permits issued by the U.S. Army Corps of Engineers for construction of an export facility on the river, agreeing with conservation and public health groups that further environmental review was necessary.

And then in January, following the additional environmental study, Ecology officials refused to issue a key permit. The company and the port appealed, but that appeared to be rendered moot by Friday's news.

In a written statement, Northwest Innovation Works thanked the port and local government and labor unions for their support.

“We remain committed to addressing the global climate challenge, creating jobs and economic growth, and are moving forward in developing other innovative net zero projects,” the company said.