Biden has backed calls for a global minimum corporate tax rate of at least 15%. 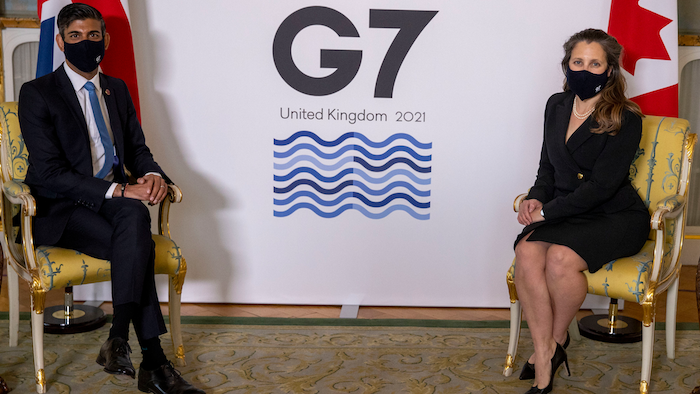 Finance ministers from the Group of Seven leading industrialized nations are meeting ahead of the annual summit of G-7 leaders scheduled for June 11-13 in Carbis Bay, Cornwall. The U.K. is hosting both sets of meetings because it hold’s the group’s rotating presidency.

“I’m determined we work together and unite to tackle the world’s most pressing economic challenges, and I’m hugely optimistic that we will deliver some concrete outcomes this weekend,” Rishi Sunak, chancellor of the exchequer, said before the meetings began Friday morning.

The G-7 is under pressure to provide vaccines for low-income countries facing a third wave of COVID-19, finance projects to combat climate change and agree on a global minimum tax to ensure digital companies and other multinationals pay their fair share of government revenue.

The International Monetary Fund, World Health Organization, World Bank and World Trade Organization said this week that the G7's top priority should be ending the pandemic and securing the global economic recovery.

IMF economists recently estimated it would cost $50 billion to vaccinate 60% of the world’s population by the middle of next year, and that achieving that goal would generate $9 trillion in additional economic output by 2025.

"That would be the largest investment return in the history of humankind,’’ Jeevun Sandher, a former government economist who is studying the impact of tax policy on inequality at King’s College London, said in an interview with the BBC. “So the first thing today the chancellor and his colleagues from across the world should be doing is getting out their pens and writing those checks.″

U.S. President Joe Biden has backed calls for a global minimum corporate tax rate of at least 15% and an endorsement from the G-7 could help build momentum for a deal in talks among more than 140 countries being held in Paris.

U.S. Treasury Secretary Janet Yellen, who is attending the London meetings, has said a minimum tax rate is needed to end a “30-year race to the bottom” that has seen countries around the world cut corporate taxes to attract investment.

“Together we can use a global minimum tax to make sure the global economy thrives based on a more level playing field in the taxation of multinational corporations, and spurs innovation, growth, and prosperity,” Yellen said during a speech in April.

Biden’s support and the expense of combatting the pandemic have increased the chances for a deal on the global minimum tax, according to Maurice Obstfeld, a professor at the University of California at Berkeley and a former chief economist at the International Monetary Fund.

“But the challenge is going to be, how do you prevent governments from chiseling away at an international agreement through various obscure loopholes,” he told the BBC on Friday. “I think that is going to have to be part of the discussion: What sort of policing mechanism, what sort of transparency between tax authorities can you set up to make this really fly?”

Analysts are less optimistic about progress on climate change.

Sandher said he didn't expect the finance ministers to commit any funds for the fight against climate change. Instead, they will probably make a statement on the issue and impose some additional requirements for companies to report the climate impact of their investments.

“What we need to see today is the G-7 putting the money up and paying our way forward," he said. “And the cost isn't that large, about 1% of global (gross domestic product) to stop catastrophic climate change."