That's up about $10 billion from four years ago. 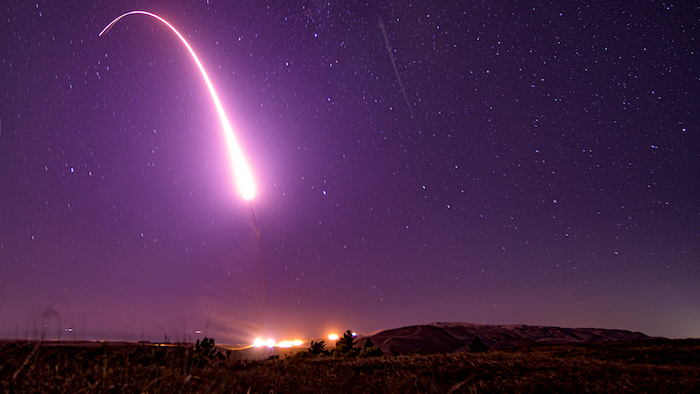 This image taken with a slow shutter speed on Oct. 2, 2019, and provided by the U.S. Air Force shows an unarmed Minuteman 3 intercontinental ballistic missile test launch at Vandenberg Air Force Base, Calif. The Pentagon has raised to $95.8 billion the estimated cost of fielding a new fleet of land-based nuclear missiles to replace the Minuteman 3.
Staff Sgt. J.T. Armstrong/U.S. Air Force via AP

WASHINGTON (AP) — The Pentagon has raised to $95.8 billion the estimated cost of fielding a new fleet of land-based nuclear missiles to replace the Minuteman 3 arsenal that has operated continuously for 50 years, officials said Monday.

The estimate is up about $10 billion from four years ago.

The weapons, known as intercontinental ballistic missiles, or ICBMs, are intended as part of a near-total replacement of the American nuclear force over the next few decades at a total cost of more than $1.2 trillion.

Some, including former Defense Secretary William J. Perry, argue that U.S. national security can be ensured without ICBMs, but the Pentagon says they are vital to deterring war. The Trump administration affirmed its commitment to fielding a new generation of ICBMs in a 2018 review of nuclear policy.

"The ICBM force is highly survivable against any but a large-scale nuclear attack,” the review concluded. “To destroy U.S. ICBMs on the ground, an adversary would need to launch a precisely coordinated attack with hundreds of high-yield and accurate warheads. This is an insurmountable challenge for any potential adversary today, with the exception of Russia.”

The current fleet of 400 deployed Minuteman missiles, each armed with a single nuclear warhead, is based in underground silos in Montana, North Dakota, Colorado, Wyoming and Nebraska. Their numbers are governed in part by the 2010 New START treaty with Russia, which is due to expire in February. Russia wants to extend the treaty but the Trump administration has set conditions not accepted by Moscow.

The U.S. also is building a new fleet of ballistic missile submarines to replace the current Ohio-class strategic subs; a new long-range nuclear-capable bomber to replace the B-2 stealth aircraft; a next-generation air-launched nuclear cruise missile; and a new nuclear command and communications system. It also is working on updated warheads, including an ICBM warhead replacement for an estimated $14.8 billion.

The nuclear modernization program was launched by the Obama administration and has been continued by President Donald Trump. Democrat Joe Biden has said that if elected in November he would consider finding ways to scale back the program.

The Pentagon's $95.8 billion cost estimate for the Minuteman replacement was first reported by Bloomberg News. The Pentagon provided the estimate to Congress last month but had, until Monday, refused to release it publicly.

Last month the Air Force awarded Northrop Grumman a $13.3 billion contract for engineering and manufacturing development of the new missiles. The total “lifecycle” cost, including operating and sustaining the missiles over their expected lifetime into the 2070s, is set at $263.9 billion.