Engineers have to troubleshoot a problem with the anchoring system. 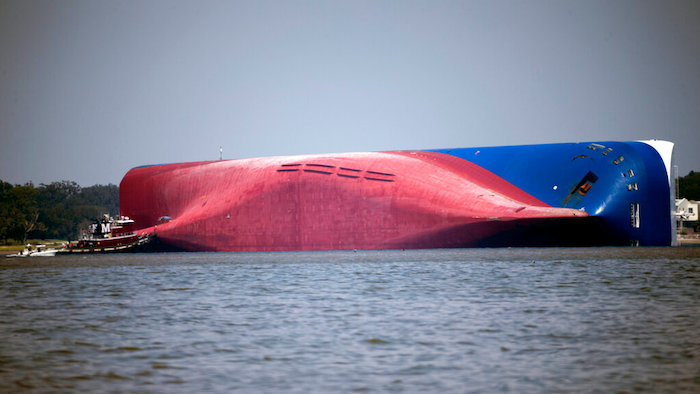 SAVANNAH, Ga. (AP) — An engineering problem has forced another delay before salvage crews can start removing an overturned cargo ship that's been partially submerged on the Georgia coast for more than a year, officials said Wednesday.

The multi-agency command overseeing the salvage of the South Korean ship Golden Ray had hoped to start cutting the giant vessel apart in early October. The command released a statement Wednesday saying it will be “several weeks” more before crews can begin dismantling the ship.

That's because engineers have to troubleshoot a problem with the anchoring system they designed to steady the towering, floating crane that will be used to slice the 656-foot (200-meter) ship into giant chunks.

One of the five anchors failed a strength test to prove it could hold against the required tonnage, said Coast Guard Petty Officer 2nd Class Michael Himes, a command spokesman.

The ship had just left the Port of Brunswick with 4,200 automobiles in its cargo decks. The vehicles remain onboard.

Experts decided the ship was too badly damaged to be removed intact, and instead came up with a plan to slice it into eight massive pieces for removal by barge.

A busy Atlantic hurricane season as well as a handful of coronavirus infections among members of the salvage team had already delayed the ship's removal. The command has booked an entire resort nearby through Jan. 21 to isolate 100 salvage workers as a safeguard against the virus.

The Coast Guard held hearings on the cause of the shipwreck last month. An expert concluded the Golden Ray tipped over because unstable loading had left its center of gravity too high. Coast Guard Lt. Ian Oviatt said the ship lacked enough water in its ballast tanks, used to add weight at the bottom of a vessel, to offset that of the vehicles in its cargo decks above.