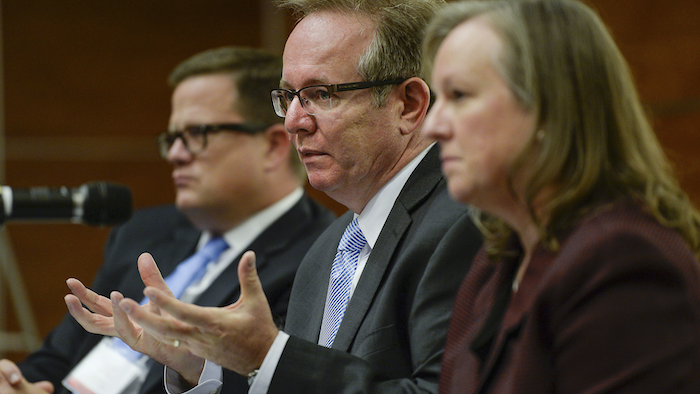 Stewart's comments came during a national security conference he hosted on the University of Utah campus in Salt Lake City. NSA Utah director Dave Winberg was among the speakers, but didn't talk specifically what happens at a $1.7 billion data center south of Salt Lake City. He instead focused his remarks on the NSA's global purpose.

Stewart, a Republican, said the public shouldn't believe the misconceptions about what goes on at a facility that sits on a National Guard base about 25 miles south of Salt Lake City in the town of Bluffdale. The center became a target of scrutiny after revelations in 2013 that the NSA has been collecting millions of U.S. phone records and digital communications stored by major Internet providers.

Stewart said the center provides language translation, transcription, analysis and reporting as well as development services to several operations levels of the NSA.

Stewart, a member of the House Intelligence Committee, told the audience that they would be proud of the work done there if they were privy to that information.

Stewart had strong words when asked about Edward Snowden, the exiled whistleblower who leaked classified documents about U.S. government surveillance. Stewart called him one of the "most destructive traitors America has ever seen" and said his supporters don't understand what he did to the country.

Herbert, who spoke during the daylong national security conference on the University of Utah campus, told reporters afterward he doesn't have specific concerns specifically about the NSA's facility in Utah but said he has concerns about whether Congress is sufficiently monitoring the NSA's practices around the country.

"The NSA, conceptually, has a significant role to play, particularly to make sure they protect us against outside, evil influences and know what the bad guys are up to," Herbert said: "Whether it's in Utah or in Virginia or Maryland or Pennsylvania or some other place does not matter to me. Whatever their function is, it should have significant oversight by Congress to make sure they are not violating our civil rights here in America."

Winberg, who oversees the Utah facility, said that the U.S. and its leaders have never been more vulnerable to cyberattacks from enemies because everyone uses the same networks.

He said hundreds of government databases are attacked daily — not only by individuals, but by foreign governments and enemies. He said cellphones and wireless devices offer leaders' the ability to stay connected, but also become a risk.

"To overcome the very real threats to our country, national decision-makers need to know what adversaries are doing," said Winberg, reading from a pre-approved speech. "They must be able to outmaneuver those who would do us harm in cyberspace."

During a question and answer session, Winberg said he and other NSA officials are hamstrung by what they can say because they work for an intelligence agency. "Loose lips really do sink ships," he said. Afterward he said wasn't authorized to speak with reporters.

Winberg sounded the alarm about the threat of cyberattacks impacting the nation's electricity and power grids, water systems and natural gas pipelines. He said hospitals and emergency services are also vulnerable. He highlighted recent hacks on the U.S. Post Office, Home Depot and Target as examples of the damage cyberattacks can inflict.

He compared the country's attempts to establish a cyber-security plan to when the country was facing nuclear weapons threats in the 1940s-1950s.

"Cyber is in the infant stage of that same kind of realm. It's simply going to take us some time to develop the strategies and polices and the framework within the United States' government of how to collectively and efficiently deal with this very complex problem," Winberg said. But, he said, "We are not standing idly by."