An autonomous car developed by Michigan-based auto supplier Delphi Automotive will soon be making a 3,500-mile journey across the U.S. 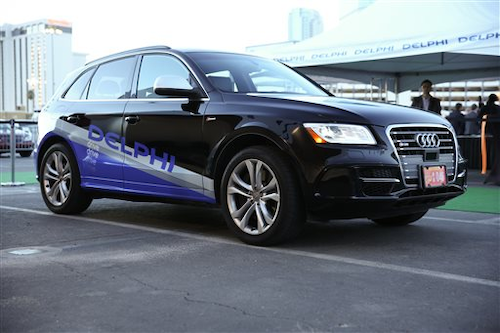 AUBURN HILLS, Michigan (AP) — Call it a preview of the cross-country road trip of the future.

An autonomous car developed by Michigan-based auto supplier Delphi Automotive will soon be making a 3,500-mile journey across the U.S. A person will sit behind the wheel at all times but won't touch it unless there's a situation the car can't handle. The car will mainly stick to highways.

Companies both inside and outside the auto industry are experimenting with technologies that take more and more responsibilities away from the driver — right up to the act of actually driving the car. Most experts say a true driverless vehicle is at least a decade away.

Delphi plans to show off one of several versions of the car — an Audi Q5 crossover outfitted with laser sensors, radar and multiple cameras — on Saturday at the South by Southwest festival in Austin, Texas. The official car will start its journey March 22 in San Francisco and arrive in New York a little more than a week later.

The autonomous Audi warmed up for its long journey by racking up lots of miles tooling around Delphi's Silicon Valley office and taking a drive from San Francisco to Los Angeles. Delphi showed off the car at the Consumer Electronics Show in Las Vegas in January where, during a demonstration, the car braked by itself — just like it was supposed to — when two inebriated men fell into the street in front of it.

Delphi executives say driving the car for six to eight hours per day on various roadways and in very different weather conditions will give them valuable data that can help improve the technology. Engineers will also be looking for ways to make drivers and passengers more comfortable with the idea of autonomous driving.

"We're going to learn a lot out of this," said Jeff Owens, Delphi's chief technology officer.

Delphi officials believe the upcoming road trip is the longest automated drive ever attempted in North America. In 2010, the Italian company VisLab took a driverless van on an 8,000-mile, three-month journey from Europe to Shanghai.

Delphi's autonomous vehicle looks like a regular car, and not a science project. Anyone who looks at driverless cars developed by Google, Honda and others, immediately notices the circular, spinning sensor on top, scanning the surrounding area with lasers, a technology known as lidar. Instead, Delphi tucked six lidar sensors into the car's front, rear and sides. And because lidar sensors don't work well in heavy snow or rain, the car has six radar sensors that can also detect road obstacles. The car also has cameras throughout, including one that watches the driver.

Delphi says the vehicle is capable of making complex decisions, like stopping and then proceeding at a four-way stop, timing a merge onto the highway or maneuvering around a bicyclist or a trash can. When it wants the driver to resume control, it uses a verbal warning and flashes lights on the dashboard.

Owens won't say how much its autonomous prototypes cost, but for now, this technology is prohibitively expensive. Lidar systems can cost upward of $70,000 apiece.

Doug Welk, an engineer in the company's automated driving program, said the cross-country drive will help Delphi figure out the best combination of sensors, ultimately helping to lower costs. Delphi estimates it will cost around $5,000 to make a vehicle almost fully autonomous by 2019.

Owens said Delphi has been working on automated driving since 1999, when it first started putting radar sensors on cars. Now, 2 million cars are outfitted with those sensors, which are used for adaptive cruise control, automatic braking and other features.

Fully autonomous driving could come over the next decade or two, Owens said. Driverless cars are even further away. But in the meantime, Delphi sees autonomous features, like pedestrian detection or vehicle-to-vehicle communication systems, as a way to drastically cut the number of traffic deaths worldwide.

"This technology can make a serious impact on those statistics," Owens said. "The car is not distracted, even if the driver is."