U.S. Files Case Against Indonesia For Barriers To Farm Imports

The United States is escalating a food fight with Indonesia, charging that the Southeast Asian country violates world trade rules by blocking imports of fruit, produce and meat. 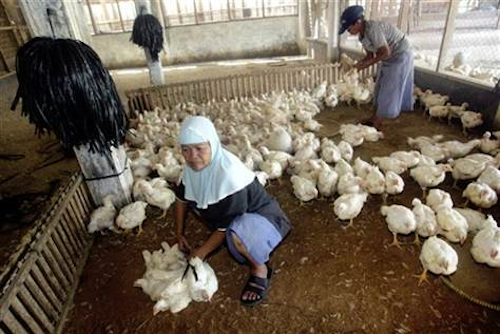 WASHINGTON (AP) — The United States is escalating a food fight with Indonesia, charging that the Southeast Asian country violates world trade rules by blocking imports of fruit, produce and meat.

U.S. trade and agriculture officials announced Wednesday that the U.S. is bringing a case against Indonesia at the World Trade Organization in Geneva. The United States has long complained about Indonesian trade policies, including a ban on chicken and other meats and licensing requirements that limit U.S. farm exports.

Without those barriers, the U.S. argues, Indonesia would be a more lucrative market for U.S. farmers — its population of 254 million is the world's fourth largest. But America exports more fruit and vegetables to Malaysia, with a population of 30 million people, and more meat to the Philippines, with 108 million people.

New Zealand is joining the United States in the case.

Among the U.S. products affected by what the U.S. calls Indonesia's "unjustified" licensing requirements and other trade barriers are apples, grapes, oranges, potatoes, onions, flowers, beef and chicken. The U.S. argues that the barriers violate a 1994 world trade agreement.

"When our trading partners don't play by the rules it costs American jobs, so it is critical we hold them accountable," said U.S. Agriculture Secretary Tom Vilsack.

Indonesia's embassy in Washington did not immediately respond to a request for comment.

The complaint comes as the Obama administration seeks congressional support for an ambitious trade agreement with 11 Pacific Rim countries including Japan, Australia, Canada and Mexico but not Indonesia. The administration also wants so-called fast track authority to negotiate trade deals that go to Congress for an up-or-down vote, no nitpicking allowed.