GM To Suspend Volt Production For 4 Weeks This Summer

General Motors will stop making the Chevrolet Volt for four weeks in June and July due to slow sales and to deal with the change to an all-new version of the gas-electric hybrid car. 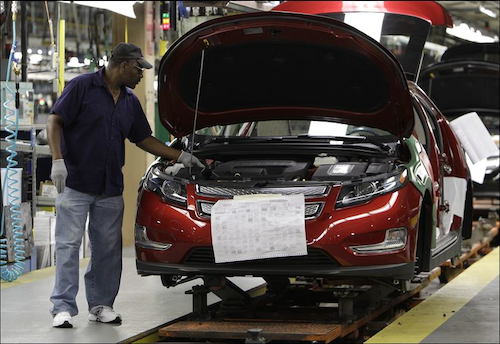 DETROIT (AP) — General Motors will stop making the Chevrolet Volt for four weeks in June and July due to slow sales and to deal with the change to an all-new version of the gas-electric hybrid car.

The company says the Detroit-Hamtramck plant that makes the Volt and four other cars will probably stay open through the summer despite plans for the Volt. The factory also is undergoing construction so it can build a new full-size Cadillac CT6 and the 2016 Volt starting late in the summer.

Sales of electric and hybrid cars have slowed this year, largely due to low gasoline prices. The national average for a gallon of regular gas was about $2.40 on Thursday, 35 percent lower than last year's peak of $3.70.

The cheap gas has really hurt Volt sales and caused inventory to build on dealer lots. Through March, GM sold only 1,874 Volts, down 48 percent from a year ago. The company now has enough Volts to supply dealers for 210 days, according to Ward's Automotive. A 60-day supply is optimal.

Volt production will cease in the weeks before the traditional two-week auto plant shutdown over the July 4 holiday. The high inventory of Volts is a factor in the production cuts, but not the only one, GM spokeswoman Michelle Malcho said. The plant construction, engineering changes and pre-production plans for the new Volt and CT6 all were part of the decision, she said.

The factory also makes the Opel Ampera and Cadillac ELR electric hybrids that are similar to the Volt, as well as the Chevrolet Malibu midsize car and Chevy Impala full-size car — all on the same assembly line.

The Volt starts around $34,170, excluding a $7,500 federal tax credit. It can go up to 38 miles per gallon on battery power before a gas-powered generator kicks in. The next-generation Volt will have more room inside, a sleeker look, and will be able to go up to 50 miles per charge. Pricing has not been released.

GM also plans to build a fully electric car for the 2017 model year called the Bolt with a 200-mile range and a price of $37,500 before the tax credit.

The new Volt can go up to 50 miles on electricity, compared with the current model's 38 miles.