The European Union has unveiled a long-term strategy to help its technology companies compete with U.S. giants like Google and Amazon by unifying the continent's digital sector and taking a hard line on abuses by dominant firms. 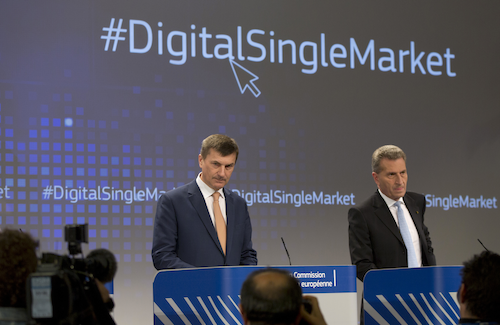 BRUSSELS (AP) — The European Union has unveiled a long-term strategy to help its technology companies compete with U.S. giants like Google and Amazon by unifying the continent's digital sector and taking a hard line on abuses by dominant firms.

EU Commissioner Andrus Ansip said Wednesday that the EU is still far too fragmented across its 28 national markets and needs more common rules to be competitive. He claimed new plans to unite the digital economy should help create jobs and growth on a continent still struggling to emerge from the financial crisis.

At the same time, the Commission opened an inquiry into the sector to see where open competition is stifled, especially when it comes to cross-border online trade in sectors like electronics and clothing. The inquiry would look at the way that companies like Google, Amazon, Facebook or e-Bay handle online trade.

The strategy involves creating more unified regulation of the Internet. The plan is to make e-commerce easier across borders by harmonizing rules on contracts and consumer protection when people buy products online ranging from furniture and shoes to e-books or apps.

The rules would be enforced more rapidly and consistently.

It would try to end practices like geo-blocking, which stops customers from using websites in another country, as they can increase prices, for example for car rentals at a foreign vacation destination.

Copyright laws would be updated so that travelers have better access to films, music or information.

An overhaul of telecom rules would hopefully draw more investment into high-speed broadband.

The Commission said its plans will give consumers more choice, better protection and cut the delivery prices of products. They would also boost transparency on the Internet.

Industry would have clearer rules, a level playing field in the market, and less red tape to deal with in public administrations using efficient e-services. Ansip said he hoped to have a final report on the plans in two years.

At the same time, the anti-trust inquiry will help the EU identify any obstacles to fair online business.

EU Competition Commissioner Margrethe Vestager said the inquiry's "aim is to determine how widespread these barriers are and what effects they have on competition and consumers."

She threatened to take action if any breaches of competition rules were found.

"The idea of regulating platforms is ill-conceived given that businesses from newspapers to e-commerce sites to cars are increasingly becoming digital platforms," said the CCIA association representing computer, communications and Internet industry firms.

The digital technology industry umbrella group Digital Europe said the big challenge would be to avoid crossing the line into protectionism, resisting the urge to regulate too much and keeping growth and jobs as the top priority.