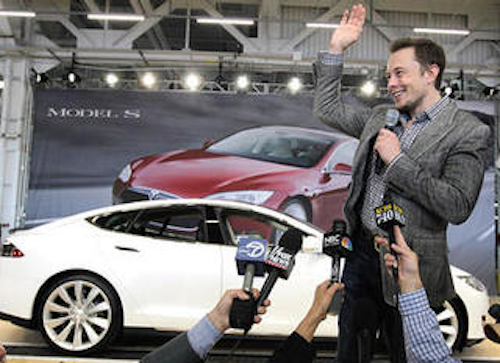 CEO Elon Musk said Friday that the upgrade will cost $10,000 for new buyers of the Model S, whose base price is $70,000. Current Model S owners will be able to get the upgrade for $5,000 plus the cost of installation in the next six months.

It will allow the car to go from zero to 60 miles per hour in 2.8 seconds. Tesla had referred to a previous package as "Insane Mode."

Musk also said Tesla will upgrade the battery pack of the Model S to improve its range, something it plans to do every year. The upgrade will cost about $3,000, and it will give the car a range of about 300 miles on the highway on a single battery charge, about 15 miles more than the current version.

The company also announced a rear-wheel drive version of the Model S that will cost about $5,000 less than the standard model.

Earlier this month Tesla said its deliveries grew 52 percent to more than 11,000 in the second quarter.

The name "ludicrous mode" comes from Mel Brooks' 1987 "Star Wars" spoof "Spaceballs," where a spaceship is able to surpass light speed - traveling so fast it turns plaid. Tesla said the next version of its Roadster car will have a "maximum plaid" speed, but that Roadster won't be available for another four years.