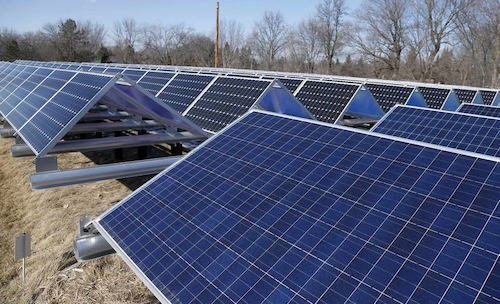 Berkeley Lab researchers used semiconductor nanowires to collect solar energy, which then split water molecules into their hydrogen and oxygen components. Microbes then used the hydrogen to convert atmospheric carbon dioxide into methane.

The process builds on the researchers' initial "artificial photosynthesis" system, which used nanowires to convert solar power into a variety of carbon-based chemical products.

The new process could also enable hydrogen from other sustainable energy sources to be used in chemical processing, and could eventually be applied to different microbes and additional chemicals.

In addition, the production of methane could be sustainably fueled by microbes instead of collected as a byproduct of natural gas drilling, where it is a potent greenhouse gas.

"This study represents another key breakthrough in solar-to-chemical energy conversion efficiency and artificial photosynthesis," said chemist Peidong Yang, one of the leaders of the study published in the journal Proceedings of the National Academy of Sciences.