General Motors CEO Mary Barra stressed that the recovering European branch Opel is vital to GM as she showed off a new version of the mainstay Astra compact at the Frankfurt auto show. 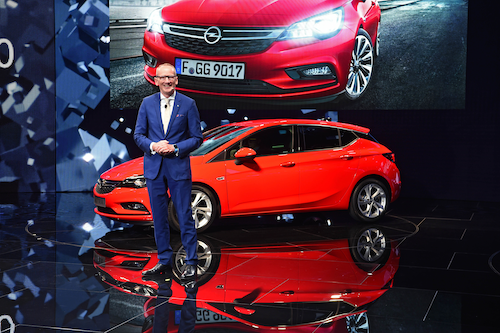 FRANKFURT, Germany (AP) — General Motors CEO Mary Barra stressed that the recovering European branch Opel is vital to GM as she showed off a new version of the mainstay Astra compact at the Frankfurt auto show.

Barra said Tuesday the new Astra will "play a significant role in the long term success of Opel."

The brand based in Ruesselsheim, Germany, has been struggling in recent years in a fiercely competitive market for mass-market vehicles in Europe, but is expected to return to profit by 2016.

She joined Opel chief Karl-Thomas Neumann on stage to show off the Astra in its hatchback version, which was unveiled before the show, and pulled the cover off the station wagon version.

The new version — the 11th edition — will be key in growing sales in Europe. It goes up against a new Renault Megane, also being shown in Frankfurt, and the Ford Focus and Volkswagen Golf.

It has lost 200 kilograms (440 pounds) compared with the previous version, which should improve handling. It also offers technology such as lane maintenance assistance and support for the Android Auto and Apple Carplay interfaces. That enables drivers to use smartphone functions through a dashboard display screen so they can access things like navigation, music and messaging.

Opel went through a rough patch after GM flirted with selling it as the Detroit-based automaker went through bankruptcy restructuring in 2009. Wrangling with employee representatives over efforts to close some production facilities also dented the brand. Since then, Opel has introduced successful new models such as the Mokka small SUV and has gained sales and market share.