The city will be the main testing ground for a smart device installed in vehicles to warn motorists of impending dangers and congestion, the U.S. secretary of transportation announced Monday. 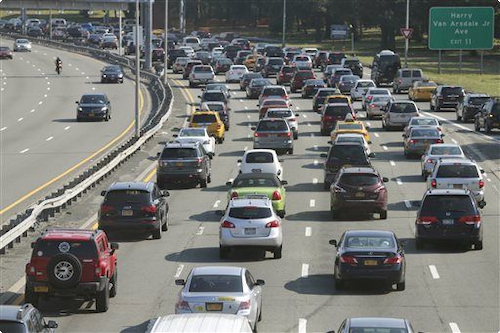 NEW YORK (AP) — The city will be the main testing ground for a smart device installed in vehicles to warn motorists of impending dangers and congestion, the U.S. secretary of transportation announced Monday.

Secretary Anthony Foxx said New York will receive up to $20 million to develop the so-called connected vehicle technologies he hopes will eventually be used across the country.

As many as 10,000 cars, yellow taxis, buses and trucks are to be retrofitted with the sensory devices in New York by 2017, allowing anonymous vehicle-to-vehicle communication to avert crashes. Technology installed at key intersections will beam information to motorists and help to keep pedestrians safe. And as the pilot program progresses, a mobile phone app is anticipated so pedestrians can pick up alerts.

"Today's announcement is a big step forward for the future of how we move in this country, from our rural communities to our biggest cities," Foxx said at a news conference at a Queens center that controls the city's traffic lights.

The pilot program's focus is midtown Manhattan, one of the nation's most congested traffic areas, and parts of Brooklyn. The system also will be tested in Tampa, Florida, and around Wyoming to vary traffic conditions in which the technology operates.

Once testing is completed and the system design is adjusted based on performance, the aim is to equip other communities with the device.

"We look forward to testing this exciting safety technology on some of the toughest streets in the world," Trottenberg said.