Chinese President Xi Jinping said Tuesday that China and the United States could work together to address cyber crimes, a problem that has sparked mutual tension. 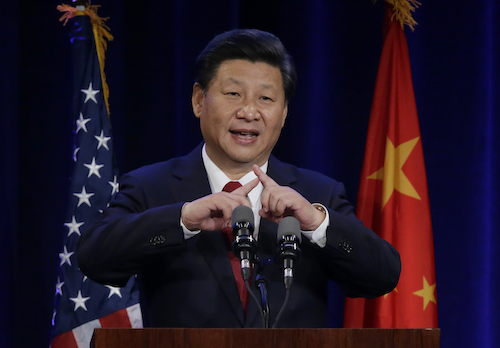 SEATTLE (AP) — Chinese President Xi Jinping said Tuesday that China and the United States could work together to address cyber crimes, a problem that has sparked mutual tension.

Xi's statement came shortly after leaders from both countries signed an agreement to advance renewable energy and clean technologies to combat climate change.

Xi, in a speech in Seattle at the end of the first day of his official visit to this country, also said China would continue its policy of aggressive development to help more Chinese people "live a better life."

Striking agreements to ensure continued robust international trade was a top priority, he said. "China will never close its open door to the outside world," Xi said, according to a translation of his remarks.

He said China was a staunch defender of cybersecurity, but it had also been a victim of hacking.

The issue of cyberattacks is a sensitive one between the two nations. American officials say hacking attacks originating from China are approaching epidemic levels.

As Xi spoke Tuesday evening, protesters gathered near the downtown hotel he was staying at, objecting to things like the country's policies in Tibet and other issues.

"We can be the core for our national leaders to learn from," Michigan Gov. Rick Snyder, who has made five trips to China in five years, told his counterparts.

Xi arrived in Seattle for talks on how U.S. and Chinese experts and businesses can collaborate on issues such as nuclear energy and smarter electricity use.

The visit comes a year after Xi and Obama announced their nations would cooperate to fight climate change.

"These are the largest economies in the world, and we're the biggest emitters of greenhouse gases, so improving cooperation and collaboration is really a necessity," said Brian Young, Washington state director of economic development for the clean technology sector. "Second, it's a huge business opportunity. Both sides recognize the opportunity for job creation."

The governors who met with Xi included Snyder, Jay Inslee of Washington, Jerry Brown of California, Terry Branstad of Iowa and Kate Brown of Oregon. All five — along with Nevada Gov. Brian Sandoval, who did not attend the meeting — signed the accord in which they agreed take actions to reduce transportation emissions, support clean energy technologies and exchange ideas.

U.S.-China cooperation on climate-change has been a warm and fuzzy point of relations between the superpowers.

Last November, Obama and Xi announced that the countries would work together on climate change, with China announcing it would try to cap its greenhouse gas emissions by 2030, or sooner if possible.

By contrast, hacking attacks on the U.S., said to be directed by Beijing; China's moves to assert its territorial claims in the South China Sea; and human rights issues have been sore spots.

Xi's visit to the U.S. includes a state dinner on Friday with President Barack Obama in Washington, D.C.

The trip comes at a time when China's economic growth has slowed considerably as the communist nation overhauls its economy.

Some clean-tech firms in Washington state, which relies largely on hydropower and where natural gas is currently cheap, may find markets and investment in China sooner than they might domestically.

Also on Tuesday, TerraPower Inc., an energy company founded by Bill Gates, entered into an agreement with China National Nuclear Corp. to work together on next-generation technology for nuclear power plants.

China invested a record $83 billion in renewable energy last year, according to the Frankfurt School's Center for Climate and Sustainable Energy Finance in Germany.

Supporters turned out in Seattle to welcome the Chinese president and other dignitaries traveling in his motorcade.

Wendy Hu, a native of Guangdong Province who has lived in Seattle for 20 years, brought her 11-year-old daughter, Anna Ni.

"China and the U.S. are good partners now, with Boeing and Microsoft," Hu said. "I love both countries."

Hundreds of protesters from the religious group Falun Gong also demonstrated, holding banners and banging drums as the motorcade passed.

Falun Gong says its members are persecuted in China.

"It's about compassion and tolerance," said Sabrina Chang, 28, who traveled to Seattle with other Falun Gong practitioners for the protest.