More than a year after Elon Musk's solar energy company bolstered its efforts to get into manufacturing, SolarCity on Friday announced the development of the industry's most efficient solar panel. 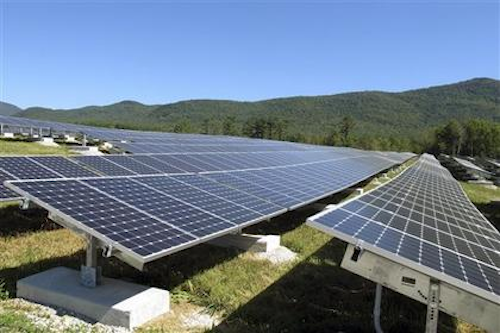 More than a year after Elon Musk's solar energy company bolstered its efforts to get into manufacturing, SolarCity on Friday announced the development of the industry's most efficient solar panel.

The California-based company, chaired by Musk and founded by his cousins Lyndon and Peter Rive, said that the new panels converted sunlight into electricity at a 22.04 percent clip.

Reuters reported that the panels exceeded the 21.5 percent efficiency of industry leader SunPower.

SolarCity is the nation's largest solar panel installer, but the company purchased Silevo last year in an effort to expand into panel manufacturing and, eventually, lower its costs.

"Now that we are going to be making the best module in the world, hopefully that addresses anyone's skepticism," Lyndon Rive told Reuters.

The new panels will be built at the company's forthcoming plant in Buffalo, New York, beginning in 2017.

They will be used only in specific locations — including those with space constraints — and SolarCity customers will reportedly not be able to pick the company's panels over those made for SolarCity by other manufacturers.

Rive added that the company won't be able to make enough solar panels to keep up with installations even after the Buffalo plant is up and running.