Toyota unveiled its vision for self-driving cars in a challenge to other automakers as well as industry newcomer Google Inc., promising to start selling such vehicles in Japan by 2020. 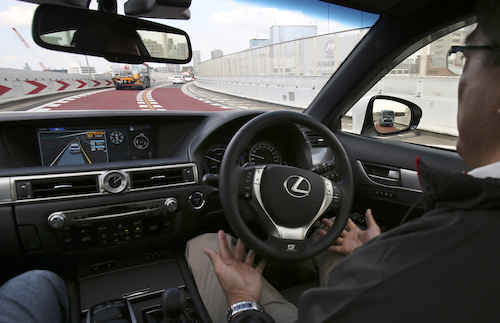 TOKYO (AP) — Toyota unveiled its vision for self-driving cars in a challenge to other automakers as well as industry newcomer Google Inc., promising to start selling such vehicles in Japan by 2020.

Toyota Motor Corp. demonstrated on a regular Tokyo freeway Tuesday what it called the "mobility teammate concept," meaning the driver and the artificial intelligence in a sensor-packed car work together as a team.

In the demonstration, a Lexus drove itself within the 60 kpm (37 mph) speed limit for about 10 minutes, changing lanes, braking and steering. The human at the wheel did nothing except turn on a button to kick in the technology.

Toyota's plans are part of a larger Japanese government initiative to pioneer automated driving in time for the 2020 Tokyo Olympics.

It also marks a shift for Toyota, which has been working on such technology since the 1990s but with great caution, warning that the idea of a driverless car was unrealistic, even dangerous.

With the advancement of sensors and telecommunications, such technology has been increasingly catching on, particularly as a safety measure in hard to execute maneuvers such as parking.

"Our goal is to offer the freedom of movement to everyone, including the elderly and the disabled," said Chief Safety Technology Officer Moritaka Yoshida.

But he acknowledged that the technology was not yet ready to be used on roads with pedestrians and bicyclists.

Along with curbing emissions with plug-in hybrids and fuel cell vehicles, self-driving technology is a focus of research for the auto industry. Both will be highlighted in the upcoming Tokyo Motor Show, which opens to the public later this month.

Google is also testing and refining self-driving technology, putting pressure on the auto industry to innovate.

Toyota demonstrated another futuristic automated technology called Intelligent Transportation System, which it has been testing on roads in the Toyota city area and Tokyo.

The system will be offered as an option in three models going on sale in Japan later this year, including the Crown luxury model.

Tests are starting in the U.S., but sales plans are not yet decided.

A vehicle equipped with that technology communicates with sensory-transmission equipment at street corners that detects oncoming cars, as well as pedestrians, and warns the vehicle through data transmission. The warning appears as an image on the dashboard, and the car beeps. It is useful in alerting drivers to cars and pedestrians popping out from blind spots.

The technology can also be used for cars to communicate with each other, and fine-tune cruise control, so that the car in the back responds more quickly if two cars driving on the same street are equipped with this technology.

Toyota officials said the technology has tremendous potential to reduce accidents, although it is unlikely to have much of an effect in the beginning because the transmission sensors are installed in only 20 places, including 15 in Toyota's headquarters area.

The plan is to expand that to 50 places in Japan by spring 2016, according to Toyota.

Nissan has also demonstrated car-detection technology on Yokohama roads, but using a different beaming technology. Toyota's new transmission system uses a different standard that will be open for use by all automakers in Japan. In Japan, accidents at intersections account for about 40 percent of all traffic accidents.