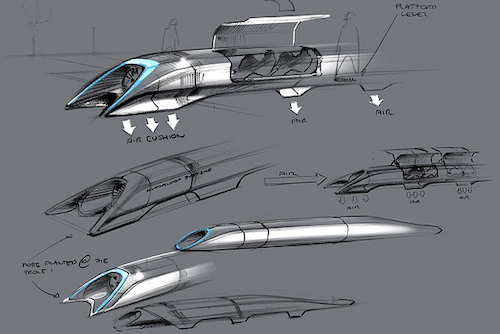 The SpaceX Hyperloop Pod Competition was originally announced in June 2015. Now, Arx Pax has announced that its patented Magnetic Field Architecture (MFA) hover engine technology will be accommodated in the draft specifications for the competition — and the engines can now be purchased for use.

“It’s an honor for MFA to be accommodated in this competition,” says Greg Henderson, Arx Pax co-founder and CEO. “We are excited that our hover engines will be in the hands of very talented individuals, and can’t wait to see what they can achieve. The applications for MFA are limitless, and we believe it’s the most feature-rich maglev technology available.”

MFA technology was first presented to the public with the unveiling of the Hendo Hoverboard, the world’s first hoverboard, in 2014. However, the original hyperloop concept (evacuated tube transport) was patented by Daryl Oster in 1999.

While many credit Musk with the idea, his Alpha Paper, which described his version of the hyperloop concept, wasn’t released until 2013.

Since its publication, people from all levels of the industry have reviewed the paper, and many are solving the problems Musk presented – Arx Pax being one of the companies to do so.

With MFA, one system provides levitation at 50 times the height of air bearings (25 mm). Lift can also be redirected for propulsion and it can move in any direction (as opposed to the Musk’s hyperloop design which can only move in one direction).

Another company, JR Central, has proposed a super conducting maglev system (SCMaglev) as an alternative to Musk’s design. The company is currently being contracted to build a high-speed rail in Tokyo that will be complete in 2027; however, the design is complex and incredibly expensive — $500 million per mile.

This cost is so great because the rail cars don’t hover under 100 mph, therefore it needs redundant wheels and tracks. It also can’t bank, so it must go through mountains.

However, MFA doesn’t require tracks, which would also allow the design to share infrastructure with cars, etc. “All we need is a conductive surface over which to levitate,” says Henderson.

Because it doesn’t require a track, the MFA system could also solve one of the biggest challenges for mass transportation since the first railroad: the last mile challenge.

“Imagine boarding a pod outside of LA. Twenty minutes later you are outside of Vegas. You stay in the pod, exit the tube, and hover down the strip right into a casino,” explains Henderson, adding the description of a train that can parallel park and turn on a dime.

Designing the pods is the next step in realizing this future that, while seems far-fetched, has already been in the works for almost two decades.

Various other companies, in addition to Arx Pax and SCMaglev, are also working to develop their own hyper loop technology, such as Daryl Oster’s ET3.

SpaceX will construct the test track next to its Hawthorne, California headquarters to test the pods. The track will be able to support (at a minimum) three types of levitation: wheels, air bearings, and magnetic levitation. Teams will present their designs initially in January 2016 and will compete later that summer.