Researchers from the Massachusetts Institute of Technology pioneered a method of controlling the bubbles in boiling water, which could pave the way for more efficient power plants. 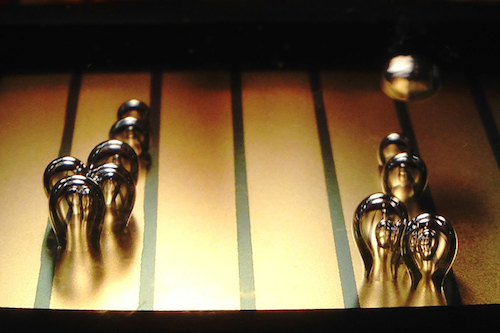 Researchers from the Massachusetts Institute of Technology pioneered a method of controlling the bubbles in boiling water, which could pave the way for more efficient power plants.

Their study, published in the journal Nature Communications, added surfactants — a detergent or other material that reduces water's surface tension — to essentially create a soapy liquid.

The surfactant molecules, however, also carried an electrical charge that could either be attracted to or repelled from an electrically charged metal surface.

With the simple flick of a switch to change the metal's polarity, MIT researchers saw a tenfold increase in bubble formation independent of temperature.

The study showed "that you can actively modify the rate of nucleation" needed to form bubbles, according to MIT mechanical engineering professor Evelyn Wang.

"It has not been shown previously that this is possible," Wang said.

Similar systems that were previously developed required special liquids — rather than water — and considerably higher voltages.

Controlling the rate of bubble formation, scientists said, allows greater control over the rate of heat transfer between metal and liquid, which could enable more efficient adjustments of boilers in power plants.

“This allows you to pick the optimum rate of heat transfer moment by moment,” Cho said.

The researchers also said that greater control of bubbling could reduce the need for liquid cooling in high-performance electronics.