Michigan Paying The Price Now For Tax Plan To Save Businesses

Automakers and Michigan agreed in 2010 to a $2.9 billion tax credit, the bill is only now coming due. 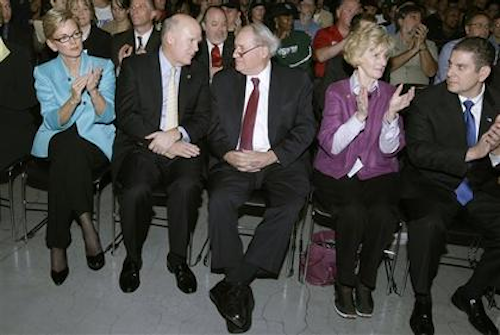 Lansing, Michigan — On a Tuesday morning in October 2010, a beaming Gov. Jennifer Granholm and executives of the Detroit Three automakers walked into a meeting of Michigan's economic development board to announce the final pieces of an agreement to head off thousands of company layoffs looming for the recession-battered state.

The state would provide $2.9 billion in tax credits to help upgrade Michigan auto plants for the future; the carmakers would agree to add and keep factory jobs on their home turf.

"Today really seals that Michigan will remain the center of automotive manufacturing in the United States and around the globe," declared the term-limited Granholm, a Democrat, a week before voters would choose her successor.

Four years later, few are saying the deals were a bad idea but any sense of celebration is long gone. The bill for the job rescue — and similar ones in other states that used tax credits aggressively — is now coming due and providing a lesson in the downside of such measures.

The auto companies and many others are cashing in hundreds of millions of dollars in credits a year, cutting deeply into state revenues at a time when the budget should be flush with a rising economy. A projected $410 million budget shortfall is triggering cuts in funding for hospitals and diverting K-12 money to other purposes.

Having called such generous tax credits the "heroin drip" of government, Republican Gov. Rick Snyder has stopped awarding new ones despite the risk of hurting business recruitment. He instead is offering a smaller pot of cash for grants and loans.

Even with the tax credit halt, Michigan is still liable for up to $9.4 billion in old credits, which could reduce tax revenue by at least $500 million a year for the next 15 years.

Though its economy is improving and unemployment rate is at a 12-year low, Michigan is going to voters in May to approve a sales tax increase for road improvements it cannot afford.

"It just is a pit in my stomach," said Rep. Ken Yonker, a pro-business Republican who owns a landscaping business outside Grand Rapids. "Why do we keep subsidizing this?"

Without them, "Michigan would be languishing in the doldrums of 2009," said Mike Johnston, a lobbyist for the Michigan Manufacturers Association.

The budget outlook is also grim in Oklahoma, which dished out tax credits to wind energy developers and other industries to spur its economy. Now, as the state suffers from sliding oil prices, it faces a budget hole of more than $600 million, and the Legislature is telling agencies to prepare for up to 10 percent funding cuts.

Especially distressing to state officials is the suddenness and uncertainty of the financial impact.

In Michigan, about 220 large companies are allowed to subtract from their future business taxes certain amounts for each job they add or keep, with higher deductions for higher-paying jobs. With salaries rising in a better economy, the value of the credits has been going up. And when company revenues rise and create a need to offset the tax liability, large blocks of credits can be redeemed quickly, cutting state revenues.

The state's economic development agency this month revised the estimated liability upward by $2.9 billion, or 44 percent, through 2031.

Aides to Granholm, who now teaches at the University of California, Berkeley, say that any grousing now overlooks the desperate situation five years ago.

General Motors and Chrysler were drowning even with emergency federal loans and ultimately had to file for bankruptcy protection. Michigan was competing with Wisconsin, Tennessee and other auto states over whichplants would close. The industry directly supports 15 percent of Michigan's jobs.

"We did what we needed to do in order to save the jobs that we saved," said Fred Hoffman, Granholm's special adviser for economic development.

The tax credit backlash is increasing sentiment among some legislators for business to accept a larger burden. Snyder and the GOP-controlled Legislature also slashed business tax rates after he took office in 2011.

"We've got major investments we've got to make in public education and infrastructure," said Rep. Jim Townsend, the top-ranking Democrat on the House Tax Policy Committee, noting that Michigan companies paid the country's third-lowest share of total state and local taxes in 2013.

But Snyder and leading Republicans are pressing companies to schedule the credit redemption in advance to help with budget planning. And the officials are pledging to be wary of the tools used in the future to boost jobs.

"Those were vastly different times," said Steve Arwood, CEO of the Michigan Economic Development Corp., adding, "I don't know what I would have done. I know I probably would have been very concerned for the very fundamentals of our economy."