Michelle Obama announced Thursday that the technology industry has promised to hire and train 90,000 military veterans and spouses over the next five years — the latest private-sector commitment to her campaign to help veterans. 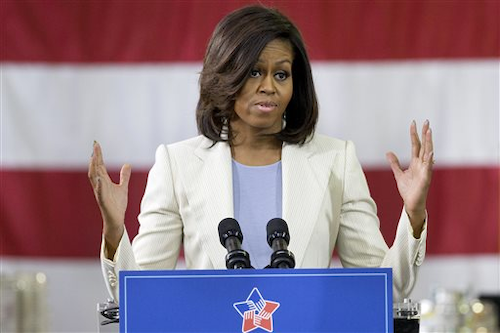 Michelle Obama announced Thursday that the technology industry has promised to hire and train 90,000 military veterans and spouses over the next five years — the latest private-sector commitment to her campaign to help veterans.

Microsoft Corp., Cisco and Oracle are among firms making the commitment, she said.

The first lady also said the private sector had far exceeded a challenge President Barack Obama issued in August 2011 to hire 100,000 veterans and military spouses by 2013.

Mrs. Obama said more than 850,000 veterans and military spouses had been hired by U.S. businesses in the four years since the president set the hiring goal.

"This is an amazing accomplishment, it really is, and I am so grateful to everyone across this country who made it possible," Mrs. Obama said at Micron Technology, a Manassas, Virginia-based manufacturer of memory storage devices.

The company hires and trains veterans for its workforce. It also participates in a pilot program that matches student veterans who attend local universities and community college with high-tech companies throughout the area, she said.

The first lady is marking the fourth anniversary of Joining Forces, the nationwide campaign she leads with Vice President Joe Biden's wife, Jill, to secure employment and other public and industry support for military veterans and their families.

Mrs. Obama also announced a smaller pledge by the fast-growing solar energy industry to hire 33,000 military veterans and spouses over the next five years.

For a moment Thursday, Mrs. Obama appeared to forget what she was talking about.

"Now it's easy to lose sight of how far we've come since we launched 'Let's Move,'" she said, before realizing her flub and correcting to "Joining Forces" as the audience laughed along with her. "Let's Move" is the first lady's initiative to reduce childhood obesity.