Fewer Americans sought unemployment benefits last week, a sign that job cuts remain low as employers are confident enough in the business outlook to hold onto their staffs. 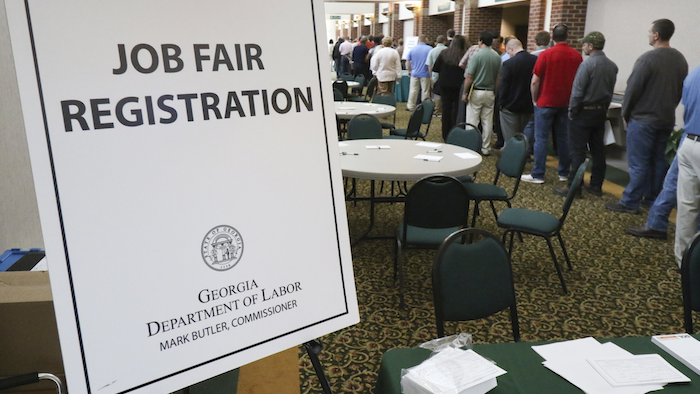 WASHINGTON (AP) — Fewer Americans sought unemployment benefits last week, a sign that job cuts remain low as employers are confident enough in the business outlook to hold onto their staffs.

Applications have been below 300,000, a historically low level, for 13 weeks.

Applications are a proxy for layoffs. The small number of people seeking benefits indicates that Americans are enjoying solid job security.

Economists are hopeful that the rock-bottom level of applications is a good sign for the broader job market. They anticipate that the May jobs report, to be released Friday, will show that employers added a solid 227,000 jobs last month, on top of the 223,000 added in April. Analysts also forecast that the unemployment rate will remain 5.4 percent, a seven-year low.

The number of Americans receiving unemployment aid fell to just below 2.2 million, the fewest since November 2000. That's just a fraction of the 8.5 million unemployed. Some of those out of work have used up all their benefits, while others, such as recent college graduates searching for work, aren't eligible for aid.

Job growth has remained healthy even as economic growth has faltered. That's an important sign that the slowdown hasn't frightened employers and may be temporary. On Wednesday, payroll processor ADP said that businesses added 201,000 jobs last month, up from 165,000 in April. The ADP's figures frequently diverge from the government's more comprehensive report.

There are some signs the economy is turning around.

The trade gap tumbled 19.2 percent in April as exports rose slightly while imports fell. Imports were artificially inflated in March by the end of a labor dispute at West Coast ports, which unleashed a flood of overseas goods that had been trapped on the docks. The narrower trade gap in April should lift growth in the second quarter.

Americans ramped up their car purchases in May. Sales rose 2 percent to 1.64 million cars and trucks, according to Autodata Corp., the fastest sales pace since July 2005.

Still, consumers remain cautious and are reluctant to boost their spending in other areas. That has surprised economists, who expected greater hiring and lower gas prices to lift spending. Gas prices have picked up in recent months, but remain about $1 a gallon cheaper than a year ago. Tepid consumer spending is holding back growth.