A tentative contract agreement reached Tuesday between the United Auto Workers and Fiat Chrysler addresses pay and health care issues, but neither side would give specifics about the pact. 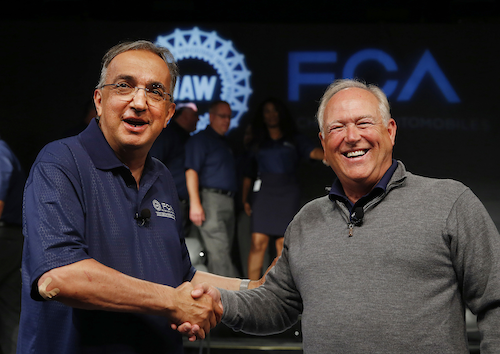 DETROIT (AP) — A tentative contract agreement reached Tuesday between the United Auto Workers and Fiat Chrysler addresses pay and health care issues, but neither side would give specifics about the pact.

The Italian-American company and union announced the accord covering about 40,000 workers nationwide after a furious and almost continuous 48 hours of bargaining. It will serve as a template for Fiat Chrysler's Detroit counterparts, General Motors and Ford, both of which are operating on contract extensions.

But UAW President Dennis Williams made it clear that he would treat the other two differently because they are more prosperous.

Union officials still must be briefed on the four-year package, then the full membership will vote on it.

At a hastily called news conference after the deal was announced early Tuesday evening, Williams said the agreement meets the union's goals but still keeps Fiat Chrysler competitive with other automakers. He told reporters he had three goals for the contract: giving entry-level workers a path to higher pay, rewarding members for sacrifices they made while Fiat Chrysler struggled financially, and dealing with escalating health care costs.

"We believe that we have met those goals, but ultimately our membership will make the final decision," Williams said.

The union was seeking hourly pay raises for longtime workers who haven't had one in a decade. It also wanted to narrow or close the wage gap for new hires, who start at about half the $29 per hour that longtime workers are paid.

The UAW agreed to the two tiers of pay when then-Chrysler was near bankruptcy in 2007. But Fiat Chrysler CEO Sergio Marchionne agreed with the UAW that tiered wages were unfair to workers. Marchionne said negotiators came up with a carefully crafted agreement "whereby that issue will go away." But he wouldn't give further details.

Fiat Chrysler, or FCA, was picked as the lead company in the talks this year, making it the focus of bargaining and a potential strike target if talks hit a snag.

The deal with FCA came after two days of talks that included an all-night session from Monday to Tuesday. Both sides had agreed to extend the contract on an hour-by-hour basis while talks continued, even as some members called for an end to talks and a strike at FCA plants.

The main issue in the talks was pay raises. The current wage gap between entry-level workers and veteran employees benefits FCA the most, since 45 percent of its hourly workers make entry-level wages. Only around 20 percent of workers at Ford and GM make the lower wage. Fiat Chrysler had no cap on the number of entry-level workers it could hire, but that was to be negotiated in the contract talks.

Marchionne has been outspoken about wanting to eliminate the wage gap. But he has indicated the top wages should come down in favor of fatter profit-sharing checks. Over the past four years, FCA workers have gotten annual profit-sharing checks totaling $9,000 per worker.

The union is also seeking guarantees from all three automakers that new vehicles will be built in U.S. factories and not in Mexico, where companies have been moving some of their production.

While the agreement will serve as a pattern for pacts with Ford and GM, there are significant differences in the companies. Ford and GM are larger and make more money. Also, FCA is the only one of the Detroit Three whose U.S. labor costs are lower than foreign competitors like Toyota; Ford and GM think that's an unfair advantage and want to be on par with FCA.

Williams said some parts of the deal will transfer to Ford and GM, but some financial provisions will be different.

"It's about whether or not the company has a greater ability to pay," he said. "I don't want people to think for one minute that I'm not looking at the other companies and the amount of money that they have made," Williams said.

Neither would say if they agreed to set up a giant health care pool, but Marchionne said there are inefficiencies in the way they now run health care.

"We have an obligation to find a better way to manage this cost," he said.

Williams and Marchionne praised each other for a cooperative relationship during the talks. The agreement came about 19 hours after the contract with FCA expired at 11:59 p.m. Monday. Williams said union leaders will have to be briefed on the pact this week, and said he didn't expect a deal with GM or Ford this week.