Votes This Week Will Decide Fate Of Fiat Chrysler-UAW Deal

The next two days will be critical in deciding the fate of a new four-year contract between Fiat Chrysler and the United Auto Workers. 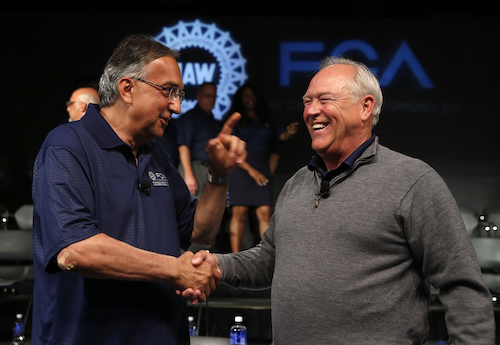 DETROIT (AP) — The next two days will be critical in deciding the fate of a new four-year contract between Fiat Chrysler and the United Auto Workers.

In early voting, workers at several factories rejected the deal, but those at a pickup truck plant in Warren, Michigan, voted in favor.

UAW leaders are still hoping that the contract will pass at large factories in Belvidere, Illinois; Sterling Heights, Michigan; and Toledo, Ohio. Results should be tallied Wednesday or Thursday at the plants, which together employ more than 12,000 workers.

The UAW, which represents about 40,000 Fiat Chrysler workers, reached a tentative agreement with the company two weeks ago that includes pay raises, the potential for increased profit sharing and a $3,000 signing bonus. But the raises don't bring an end to a two-tier wage structure that pays workers hired before 2007 more money. The contract also allows the company to shift some car production to low-wage Mexico, replacing it with new trucks and SUVs that carry higher price tags to cover higher U.S. wages.

If the deal is rejected, the union could go back to the bargaining table with Fiat Chrysler, also known as FCA US LLC, or it could shift bargaining to either Ford or General Motors. It could also go on strike. Workers at all three companies have stayed on the job under extensions of their old contract, which expired on Sept. 14. Usually the first deal reached serves as a basic template for the other two companies, although UAW President Dennis Williams made it clear he expects to get more from GM and Ford, which are more profitable than FCA.

On Tuesday afternoon, the union gave Ford notice that it intends to strike at an F-150 pickup truck plant in Claycomo, Missouri, near Kansas City starting this weekend. Union Vice President Jimmy Settles said in a notice to members that Ford isn't bargaining in good faith over local contract issues that include staffing provisions, heat stress and skilled trade schedules.

The 120-hour notice expires at 12:48 p.m. Sunday at the sprawling 7,500-worker factory, which also makes the Transit commercial van.

Ford says it's working to avoid a strike and it's confident it can negotiate a fair and competitive deal with workers.

At Fiat Chrysler plants, voting is difficult to track because plant-level union officials usually release only percentages of votes for and against the contract.

At the company's engine plant in Trenton, Michigan, south of Detroit, 80 percent of production workers voted against the deal last week.

Mike McCarthy, a machine operator, said the contract had good points, but he voted "no" because it didn't give the lower-tier workers a path to reaching the top wage of $28.50 per hour. Although he is paid at the higher hourly rate, McCarthy said there "wasn't any light at the end of the tunnel" for the second-tier workers. "We need to be more equal. It's got to be a fairer deal."

The UAW agreed to allow lower pay for entry-level workers in 2007 when Detroit automakers were struggling financially. About 45 percent of FCA's workers are paid the lower wage, while GM and Ford can't exceed roughly 20 to 25 percent.

Workers in Trenton also were concerned about moving car production to Mexico, even if the products are replaced by trucks and SUVs, because if gas prices spike, the market could shift to cars and U.S. workers could be stuck making less-efficient vehicles, McCarthy said. "Ideally you want to mix your product," he said.

Under the deal, pay for entry level workers hired after 2007 would top out at $25.35 per hour after three years, up from the current $19.28. Top-tier workers hired before 2007 would go from $28.50 per hour to $30 per hour during the four-year contract. They haven't had raises in more than a decade, although they have received profit-sharing checks.

Although a strike against FCA is possible, McCarthy says it should only be a last resort. "It's the final straw kind of thing," he said. "I hope we don't go that route."