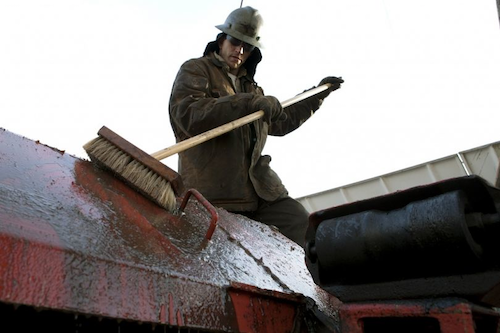 But newly released estimates from the Bureau of Labor Statistics showed that the global drop in oil prices hindered growth in many of the country's top oil producing states.

Texas, the nation's top oil producer, reported its slowest growth since the fall of 2011 in February, while its latest 12-month hiring total fell behind California.

No. 2 oil producer North Dakota ended its six-year reign as the state with the lowest unemployment rate last month, a span that coincided with the boom in hydraulic fracturing on the Bakken shale deposit. North Dakota's rate remained low at 2.9 percent, but Nebraska now leads the nation at 2.7 percent.

Those states and others could be starting to see the effects of dramatically lower oil prices on the U.S. market. Oil and natural gas companies increasingly shut down rigs as part of cost-cutting measures in recent months, although analysts remain conflicted about when those decisions will impact historically high productions levels.

Alaska, Oklahoma and Wyoming each saw job declines in the oil and gas sector, while Louisiana’s steep drop in mining and logging jobs almost certainly reflected losses in its energy industry.

The energy sectors in Colorado, New Mexico and Utah could also see declines as the fracking industry continues to cope with cost reductions.

Although California supplanted Texas as the nation's job leader between February 2014 and last month, it is also the country's no. 4 oil producer, and officials in Kern County and other oil-rich areas remained concerned about the impact of continued low crude prices.