H. J. Heinz and French’s Food have set their sights on each other's markets. Heinz is rolling out its yellow mustard, French's its ketchup. 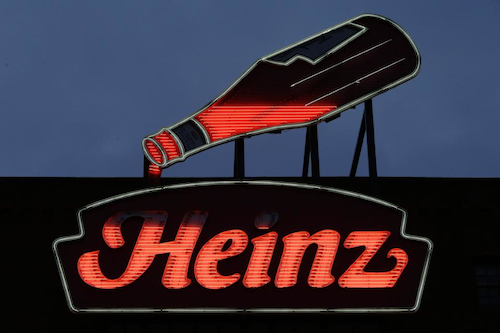 Although ketchup and mustard often accompany one another on hot dogs and hamburgers, Americans for decades have largely bought different brands of each condiment.

H. J. Heinz Co. accounts for a majority of the former, while French’s Food Co. dominates the latter market.

Each company, however, recently set its sights on the other's flagship product.

This week, Pittsburgh-based Heinz began a huge marketing push to promote its yellow mustard, which will move onto supermarket shelves after years of bulk distribution to restaurants and stadiums.

The move follows Heinz's acquisition by 3G Capital Partners and Berkshire Hathaway in 2013, as well as the recent announcement that it would purchase Kraft Foods Group.

Although Heinz did not previously put its mustard in grocery stores — and despite falling U.S. mustard sales in recent years — Eduardo Luz, the company's North American chief, called it "a no brainer to extend the Heinz umbrella to mustard."

French's, meanwhile, began a quiet foray into the ketchup market in recent months. A spokeswoman for the New Jersey-based company told The Wall Street Journal that a formal launch of the product is forthcoming.

The companies hope to capitalize on changing consumer palates, with French's touting a ketchup that's free of preservatives and artificial flavors and Heinz increasingly introducing new flavor options in its condiments.

Each, however, downplayed the significance of a potential rivalry.

"We go to grocery stores every week to see what's going on, and we just noticed those guys there," Luz said of French's ketchup.

French’s President Elliott Penner said that Heinz has "had mustard for years, and it hasn’t done well.”

"People tend to buy condiments as adults based on what they had growing up," Gail Vance Civille of consulting firm Sensory Spectrum told Bloomberg.