Fiat Chrysler is recalling more than 467,000 Dodge and Jeep SUVs worldwide to fix a faulty fuel pump relay at the root of a potential stalling problem. 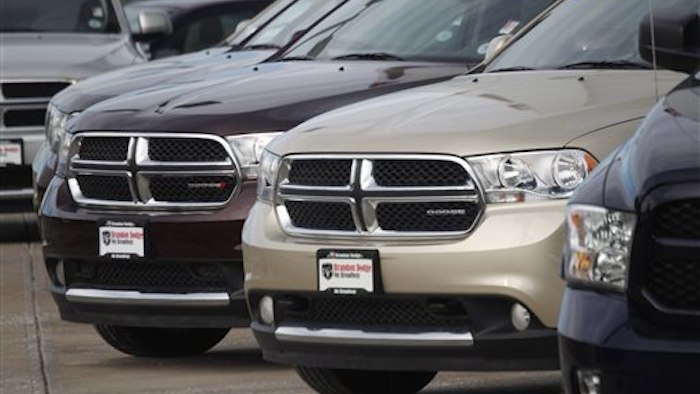 DETROIT (AP) — Fiat Chrysler is recalling more than 467,000 Dodge and Jeep SUVs worldwide to fix a faulty fuel pump relay at the root of a potential stalling problem.

It's the same problem that caused the recall of 189,000 other SUVs in September of last year, bringing the total to more than 656,000. A safety advocate says the recall should be expanded even further, contending that problems affect up to 5 million Fiat Chrysler vehicles with similar parts.

The recall announced Friday by the company covers 2012 and 2013 Dodge Durangos and 2011 Jeep Grand Cherokees outside North America. The Jeeps have diesel engines.

Chrysler says fuel pump relays can deform and cause the pumps to malfunction. That can cause unexpected stalling or prevent the engines from starting. The company doesn't know of any crashes or injuries from the problem.

Dealers will install a new relay circuit. Chrysler said that it will let customers know when they can schedule service.

Chrysler said its investigation into the first recall found that more Durangos and Grand Cherokees could have the same problem if the relays aren't replaced. The relays can become deformed due to several conditions including the environment and vehicle use patterns. Chrysler says that the problem may affect only a small percentage of the SUVs.

But the Center for Auto Safety, a nonprofit advocacy group founded by Ralph Nader, maintains that the recall is inadequate because millions of other Chrysler vehicles have the same fuel pump power control module as the Grand Cherokee and Durango.

The group filed a petition last year asking the U.S. National Highway Traffic Safety Administration to investigate power system failures in Chrysler vehicles that could cause them to stall while being driven. The center contends that an electrical power control module used by Chrysler in millions of vehicles since 2007 can go haywire, causing them to stall in traffic and cut off devices powered by electricity. The allegation covered Ram pickup trucks, Chrysler and Dodge minivans, the Jeep Grand Cherokee, Dodge Durango and Dodge Journey SUVs, the Jeep Wrangler, and other models.

The safety group said at the time that it received over 70 complaints and that the government has received hundreds.

Clarence Ditlow, the center's executive director, said Friday that Chrysler's expanded recall supports the center's petition. The safety agency has not yet decided if it will open a full investigation into the matter.

Chrysler says the power control modules don't fail, just the fuel pump relay. It says no other vehicle functions are affected by the relay.