The manufacturer of a medical instrument at the center of a recent "superbug" outbreak in Los Angeles did not receive federal clearance to sell the device, according to officials from the Food and Drug Administration. 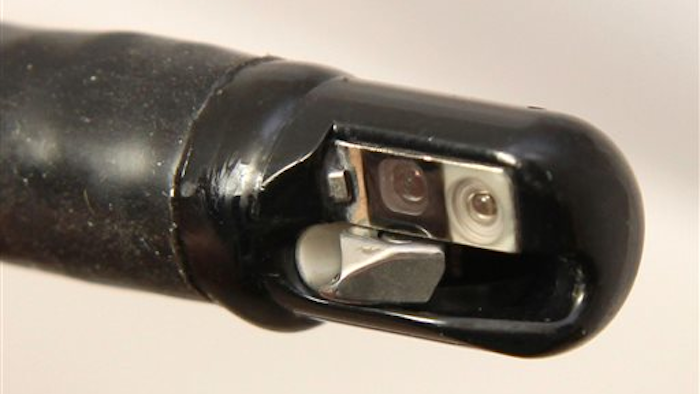 WASHINGTON (AP) — The manufacturer of a medical instrument at the center of a recent "superbug" outbreak in Los Angeles did not receive federal clearance to sell the device, according to officials from the Food and Drug Administration.

The FDA confirmed that Olympus Corp. did not seek FDA clearance for the latest version of its specialized endoscope, which it began selling in 2010. FDA clearance is required for all substantive updates to medical devices sold in the U.S.

Despite the lack of clearance, the FDA said doctors should continue using the device because it's not clear that a federal review would have prevented the recent infections reported in patients.

Olympus said in a statement that it determined in 2010 that it didn't need to submit its changes for FDA review. The company has since filed an application which is now pending at the FDA.

The company's hard-to-clean device is believed to be responsible for infections in seven people — two of whom died — who contracted an antibiotic-resistant strain of bacteria after undergoing endoscopic procedures at Ronald Reagan UCLA Medical Center between October and January. Two Olympus devices used at the UCLA hospital were found to have "embedded" infections even though they had been cleaned according to manufacturer's instructions. The specialized device, known as a duodenoscope, is a flexible fiber-optic tube that is inserted down the throat into the stomach and small intestine to drain fluids.

On Wednesday Cedars-Sinai Medical Center reported that four patients at its hospital had also been infected with the "superbug," possibly transmitted through the same Olympus device. The Los Angeles hospital launched its own investigation after learning of the UCLA outbreak two weeks ago.

An FDA spokeswoman said that the agency informed Olympus last March that the company must submit an application for its redesigned device, which the company filed last October. That application is still pending because the FDA asked the company for additional information.

In an online posting, the FDA said it does not plan to withdraw Olympus' TJF-Q180V duodenoscope, because it could cause a shortage of devices used in about 500,000 procedures per year.

The agency also noted that FDA has received reports of infections with similar devices made by two other manufacturers, Pentax Medical and Fujifilm. The FDA said last month it is trying to determine what more can be done to reduce infections linked to endoscopes.

Revelations about the lack approval for Olympus' device came as lawmakers in Congress questioned the FDA's performance overseeing the safety and design of similar instruments. In a letter Wednesday, 10 members of Congress asked the FDA to answer nearly a dozen questions about oversight of duodenoscope, including when the agency first learned about problems with infections.

"It appears that if a superior cleaning procedure cannot be developed, the best solution will be to develop a new device," states the letter, signed by six Democrats and four Republicans in the House of Representatives.

The FDA previously said the duodenoscope's complex design, intended to improve usability, also makes the device extremely difficult to clean. Bodily fluids and other particles can stay in the device's crevices even after cleaning and disinfection.

Cleaning instructions issued by manufacturers of the devices may not adequately disinfect the devices, according to the FDA. The agency has recommended that hospitals instead follow cleaning guidelines issued by several medical societies in 2011.

Infections of the "superbug" carbapenem-resistant Enterobacteriaceae, or CRE, have been reported at hospitals around the country, and some have been linked to the type of endoscope used at UCLA.

Olympus said in a statement the company "continuously strives to improve our products for safe and effective use. This includes changes to device design."