Lumber Liquidators To Pay For Safety Testing Of Flooring

Retailer Lumber Liquidators said Thursday that it stands by its products and will pay for the safety testing of laminate floors for customers to help ease concerns. 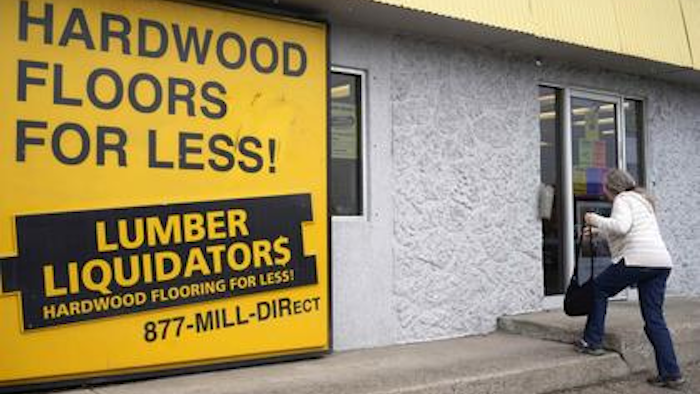 RICHMOND, Va. (AP) — Retailer Lumber Liquidators said Thursday that it stands by its products and will pay for the safety testing of laminate floors for customers to help ease concerns.

The report earlier this month said the company's laminate flooring fell short of California's standards, something it denies. Lumber Liquidators has said that it complies with all regulations for its products.

The testing being offered by the company is limited to customers with Chinese laminate flooring.

Customers are understandably concerned because "sensationalized reports provide little context," the company said in a regulatory filing ahead of its business update with investors.

"We are incensed that individuals with a financial agenda can orchestrate a campaign against us regarding the safety of our product and cause a portion of our customer base undue concern," Lynch said.

In the nine days following the broadcast, Lumber Liquidators says sales at stores open at least a year — a key gauge of a retailer's health because it excludes the volatility from stores recently opened or closed — fell nearly 13 percent but sales are returning to normal levels.

Lumber Liquidators said the indoor air quality test kits that customers will receive are the same quality used by federal officials to test workplace exposure. So far, less than 1,000 customers have requested the testing kit. If tests show high levels of formaldehyde, the company said it will pay for further testing and may pay to reinstall flooring.

A chart the company included in its regulatory filing indicated that formaldehyde emission rates of its installed laminate flooring are lower than those in cosmetics, newly applied latex paint and foam insulation.

But Whitney Tilson, the managing partner of Kase Capital Management who reached out to "60 Minutes" after receiving a tip that Lumber Liquidators was selling tainted laminate flooring, said after the company's presentation that he remains convinced that it is doing so.

"It's telling that, on its conference call, management simply read a prepared statement and didn't take any questions, despite the fact that they have had weeks to prepare," Tilson said in an email statement.

Tilson first started shorting the stock in October 2013 at $102.69. Shorting a stock is a way for investors to bet that a stock is going to decline.

Lumber Liquidators also worked Thursday to address investor worries about its liquidity after executives last week backed out of a planned appearance at an investor conference in Florida.

While the company is unable to forecast its full year net sales or profitability, the company said it believes its cash flow from operations and existing liquidity sources will be sufficient to fund its operations and anticipated expenses for the foreseeable future.

The company, which has more than 350 locations in North American, also said it plans to open 25 to 35 new stores and remodel 10 to 20 existing stores in 2015. It also plans to increase the number of stores where it provides installation services to 150 by the end of the year.

The company will provide an update on its net sales for the first quarter on April 2.

Shares of Lumber Liquidators Holdings Inc. have plunged almost 50 percent in just one month and are down almost 70 percent over the past 12 months.