Administrator of the National Highway Traffic Safety Administration told reporters that reopening the Jeep probe is among options being considered. 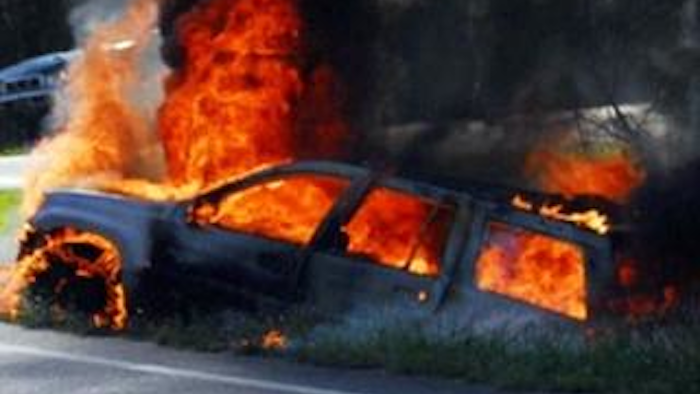 NEW YORK (AP) — The U.S. government's highway safety agency may reopen an investigation into Jeep gas tanks that can rupture and cause fires in rear-end crashes, the agency's top official said Thursday.

Mark Rosekind, administrator of the National Highway Traffic Safety Administration, told reporters in New York that he's not happy with the Jeep case and says reopening the probe is among options being considered.

"We're not satisfied with the current situation," Rosekind said. "We are looking for every avenue that would be appropriate for us to take action."

Two years ago, Jeep manufacturer Fiat Chrysler U.S. agreed to recall 1.56 million older-model Jeep Grand Cherokees and Libertys to install trailer hitches to protect the tanks. The gas tanks are mounted behind the rear axle and have little structure to protect them if struck from behind. Federal documents show that at least 75 people have died in post-crash fires because of the rear-mounted fuel tanks.

Rosekind said an internal group at NHTSA is currently examining any other possible actions that could be taken in the Chrysler recall. Asked if reopening the probe was being considered, Rosekind said: "All of that is on the table. I have challenged our defect people and our enforcement people to give me every option."

Rosekind also said he's unhappy with the pace of Chrysler's repairs. At the end of 2014, only 3 percent of the Jeeps had been fixed, and hundreds of owners complained to NHTSA that dealers didn't have parts to install on their Jeeps. The agency, Rosekind said, is waiting for Chrysler's first-quarter progress report before taking further action.

"Right now, we think it should be done faster and we want to see it 100 percent," Rosekind said of the installation of trailer hitches.

A Chrysler spokesman said that at present, 25 percent of the Jeeps have been repaired, and the company has reached owners 5.5 million times in an effort to get them to bring their SUVs in for repairs. That's an average of three contacts per owner, he said.

Rosekind's statements come one week after a Georgia jury awarded $150 million to the family of a 4-year-old boy killed when a Jeep Grand Cherokee exploded into flames three years ago after being rear-ended. The jury said Chrysler was 99 percent responsible for the crash and must pay nearly the full amount.

Jurors in Decatur County ruled that the company acted with reckless disregard for human life in selling the family of Remington "Remi" Walden a 1999 Jeep with a gas tank mounted behind the rear axle.

Walden, of Bainbridge, Georgia, was killed when the Jeep driven by his aunt was hit from behind by a pickup truck in March 2012. The fuel tank leaked, engulfing the Jeep in flames and killing the boy.

Chrysler has said it may appeal and maintains that the Jeeps are as safe as similar vehicles built at the time. It used that argument to convince NHTSA to let it to recall only 1.56 million Jeeps after the agency initially recommended that 2.7 million be repaired.

Safety advocates have called the size of the recall and the fix inadequate. Tests by NHTSA showed the hitches help in low-speed crashes of around 40 mph or less, but are of no help in higher-speed crashes.

The Waldens' lawsuit alleged that Chrysler placed the gas tank in a "crush zone" behind the rear axle and knew the location was dangerous, and that the company failed to protect the gas tank against rupturing.

Trial testimony showed that the compromise with safety regulators over the recall was worked out in a Chicago airport meeting between Fiat Chrysler CEO Sergio Marchionne, former Transportation Secretary Ray LaHood and ex-NHTSA Administrator David Strickland.

Rosekind also was critical of the auto industry's safety culture, saying its leaders should look to the aviation world as a model for how to approach safety, with zero deaths as the goal. To address this problem, in the coming months NHTSA will host a series of summits focusing on improving auto safety. Automakers have been reactive, rather than proactive, about handling recent recalls, he said.

"The fact that people are calling for enforcement, the fact that information is withheld, people are concerned that the fines aren't high enough to really change behavior," Rosekind said. "That's not a proactive safety culture."