Under pressure from U.S. safety regulators, Takata Corp. has agreed to declare 33.8 million air bags defective, a move that will double the number of cars and trucks included in what is now the largest auto recall in U.S. history. 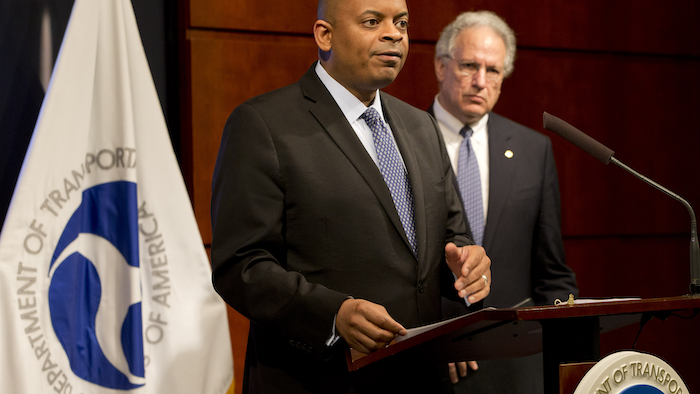 WASHINGTON (AP) — Under pressure from U.S. safety regulators, Takata Corp. has agreed to declare 33.8 million airbags defective, a move that will double the number of cars and trucks included in what is now the largest auto recall in U.S. history.

The chemical that inflates the airbags can explode with too much force, blowing apart a metal inflator and sending shrapnel into the passenger compartment. The faulty inflators are responsible for six deaths and more than 100 injuries worldwide.

The agreement adds more than 18 million airbags to existing recalls, covering both the passenger and driver's side. The recalls of passenger-side airbags, previously limited to high-humidity states along the Gulf Coast, are now expanded nationwide by 10.2 million vehicles. A nationwide recall of driver's side airbags was expanded to include an additional 7.9 million vehicles.

"We know that owners are worried about their safety and the safety of their families," said Mark Rosekind, head of the National Highway Traffic Safety Administration, as he announced the agreement. "This is probably the most complex consumer safety recall in U.S. history."

Safety regulators sparred with Takata for the past year over the size of the recalls and the cause of the problem. For the most part, the airbag maker refused to declare the inflators defective and even questioned the agency's authority to order it to conduct a recall.

Takata and 11 automakers that use its airbags, including Honda Motor Co. and Toyota Motor Corp., will have to sort out which vehicles are covered by the expanded recalls. NHTSA said the number of affected airbags could climb.

Prior to Tuesday, automakers had recalled 36 million vehicles worldwide because of the problem.

Before Takata, the largest recall in U.S. history was in 1980 when Ford Motor Co. had to fix 21 million cars and trucks with automatic transmissions that could slip into reverse. The Takata recall dwarfs last year's highly publicized recall of 2.6 million General Motors small cars for defective ignition switches and Toyota's recalls of 10 million vehicles for problems with unintended acceleration.

Rosekind said the agency and auto industry are still trying to determine precisely what is causing Takata's inflators to explode, but action needed to be taken immediately.

Takata's airbags use ammonium nitrate to inflate in a crash. But the chemical, which can be used to make bombs, is volatile. So far, testing has found that airborne moisture can get into the inflators and cause the ammonium nitrate to burn hotter than it should, Rosekind said.

He urged car owners who get recall notices in the mail should immediately make an appointment to get their cars fixed. Owners can key in their vehicle identification number at https://vinrcl.safercar.gov/vin/? to see if their car is part of the recall. The number is stamped on the dashboard near the driver's side windshield and also can be found on state auto registration documents. It may take weeks before all the identification numbers are entered into the database.

On Feb. 20, NHTSA began fining Takata $14,000 per day for failing to fully cooperate in the investigation. That fine accrued to more than $1.2 million before it was suspended Tuesday due to Takata's cooperation, NHTSA officials said. Other civil penalties are still possible, they said.

Still, it likely will be months or longer before Takata and other companies can manufacture all the needed replacement inflators. Inflators will be allocated to older cars and to high-humidity areas first, where people are most at risk, the agency said. The expansion will cost Takata millions of dollars.

Takata CEO Shigehisa Takada said in a statement that the action is a "clear path" to restoring the trust of automakers and drivers.

"We are committed to continuing to work closely with NHTSA and our automaker customers to do everything we can to advance the safety of drivers," he said.