Exploding airbags made by Takata Corp. are so dangerous that U.S. safety regulators want to manage a massive recall so cars can be fixed faster. 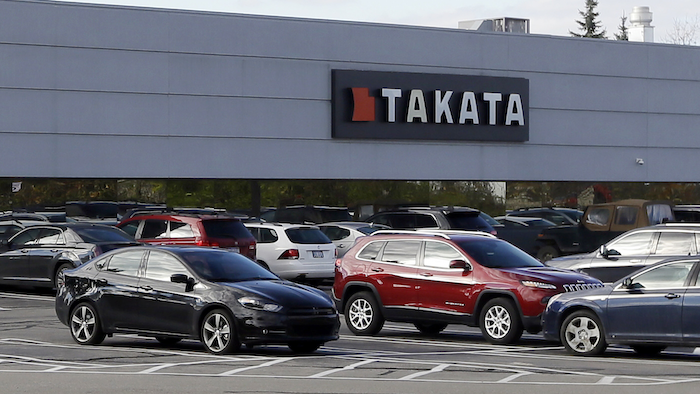 DETROIT (AP) — Exploding airbags made by Takata Corp. are so dangerous that U.S. safety regulators want to manage a massive recall so cars can be fixed faster.

On Tuesday Takata doubled the size of its recall to 33.8 million airbags, making it the largest recall in U.S. history. The airbags can inflate with too much force, sending metal shrapnel into drivers and passengers. So far the problem has caused six deaths, including five in the U.S.

The National Highway Traffic Safety Administration, in paperwork posted Thursday, says the recall involving 11 manufacturers has created a patchwork of solutions that may not fix the problem quickly enough. The agency, for the first time in its history, has started the legal process asking for input on how it can control production, delivery and installation of replacement airbag inflators.

"The number of impacted vehicles and manufacturers in combination with the supply issues related to these airbag recalls adds a previously unprecedented level of complexity to this recall," NHTSA Administrator Mark Rosekind wrote in papers posted Thursday in the Federal Register.

The agency wants to accelerate the recall process, which could take more than 2 ½ years to complete at the current pace of production of replacement parts. Takata says it has increased production to 500,000 inflators per month with plans to make up to 1 million monthly by September. So far it has manufactured about 3.8 million replacements.

Even though some replacements could be defective, NHTSA is urging people to get the repairs done as soon as they get a recall notice. Replacement inflators are better than original ones because tests have shown that the chemical used to inflate the airbags, ammonium nitrate, can degrade over time and explode with too much force because of prolonged exposure to moisture in the air.

Takata, automakers and NHTSA are trying to figure out exactly how much moisture over what period can cause the inflators to malfunction. So far an exact cause hasn't been pinpointed.

Agency spokesman Gordon Trowbridge said he's not aware of any replacement inflators exploding and injuring anyone. The agency, he said is investigating the risk. A replacement is better than doing nothing, he said.

"It may be necessary to ensure their long-term safety that we go back in again," he said.

Under pressure from NHTSA, Takata agreed this week to add about 17 million airbags to existing recalls, covering both the passenger and driver's side. The recalls of passenger-side airbags, previously limited to high-humidity states along the Gulf Coast, are now expanded nationwide by 10.2 million vehicles. A nationwide recall of driver's side airbags was expanded to include an additional 7.9 million vehicles.

The agency has sparred with Takata for the past year over the size of the recalls and the cause of the problem. For the most part, the air bag maker refused to declare the inflators defective and even questioned the agency's authority to order it to conduct a recall.

Since the recall was expanded on Tuesday, NHTSA's https://vinrcl.safercar.gov/vin/ website has been overwhelmed by people keying in vehicle identification numbers to see if their airbags have been recalled.

On Wednesday, the site was slowed by 989,000 inquiries, Trowbridge said. During the week before the expansion, the site averaged 10,000 checks per day. It may take several weeks for all cars and trucks in the expanded recall to be entered into the database.

The agency has expanded the site's capacity and added a feature that links to automaker websites if the site becomes too busy, Trowbridge said.