Fiat Chrysler will be punished soon for failing to follow the law in 23 recalls involving more than 11 million vehicles, the nation's top auto safety regulator said. 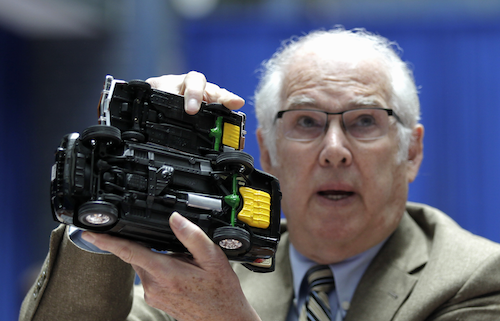 But Mark Rosekind, administrator of the National Highway Traffic Safety Administration, wouldn't say what action the agency will take until after a public comment period closes on July 17.

Rosekind spoke after a two-hour public hearing in Washington on Fiat Chrysler's recall performance that featured agency officials detailing an alarming litany of failures to notify customers of recalls, delays in making and distributing repair parts, and in some cases failing to come up with repairs that fix the problems. Some of the recalls date to 2013, and Rosekind said more allegations against the company could be added.

"The evidence seems very straightforward," Rosekind said. "There's a pattern that's been going on for some time."

Rosekind said a number of options for agency action are "on the table," including fines against the company and requiring it to buy back vehicles subject to recall. NHTSA can fine automakers a maximum of $35 million per infraction, so Chrysler could face millions in penalties. It's unlikely, though, that the company would face the top fine in all 23 recalls.

Rosekind told reporters that Fiat Chrysler needed to follow the law, meeting deadlines to notify owners and distribute parts. When it doesn't, that puts people at risk, he said. The agency said it likely would act by the end of July.

The company, in testimony Thursday, didn't dispute any of NHTSA's allegations. Scott Kunselman, Fiat Chrysler's recently appointed head of vehicle safety, said it is changing the way it manages safety to follow the industry's best practices. The safety system, he said, has been reorganized with added personnel. He now reports directly to CEO Sergio Marchionne. Previously the person in his position was three rungs down the organization chart from the chief executive, he said.

"We have learned from our mistakes and missteps," he told the agency.

Much of the testimony in the hearing focused on a recall of 1.56 million older-model Jeeps with gas tanks mounted behind the rear axles. The tanks are vulnerable to being punctured in a rear crash. At least 75 people have died in fires involving the Jeeps, according to NHTSA.

The company says they are as safe or safer than comparable vehicles built during the same time period. The recall fix is installing a trailer hitch to protect the tanks in low-speed crashes.

Todd Anderson of Connecticut, who lost his 17-year-old son when the family's 1998 Jeep Grand Cherokee was rear-ended and exploded in flames, asked the agency to order Fiat Chrysler to buy back the recalled Jeeps to get them off the road.

Anderson said the crash that killed Skyler Justice Anderson-Coughlin happened in November of 2013, five months after the Jeep recall was announced. He was unaware of the recall until getting a notice in the mail from Fiat Chrysler the following May or June and said the notice should have been sent sooner.

"If I had received the notification, my son would be alive today," he said.

Anderson said he has hired lawyers and is contemplating a lawsuit over the crash, which occurred in Longmeadow, Massachusetts.

The 23 recalls involved problems as serious as rear-mounted gas tanks that can leak and cause fires in a crash, air bags that can explode with too much force and spew shrapnel, and ignition switches that can abruptly shut off, causing engines to stall. In one recall, a recommended fix didn't work.

In one case, Fiat Chrysler delayed distribution of parts to fix a nut that can come loose from Ram truck drive shafts, said Scott Yon, chief of vehicle integrity for NHTSA. If the nuts come loose, the shaft can fall off the truck and the wheels can lock up. Owners were notified that parts were available in the fall of 2013, but the agency kept getting numerous complaints, he said.

"Although Chrysler reported that it had completed sending notices to owners in November of 2013 telling them parts were available and repairs could be completed, NHTSA continued to receive owner complaints that parts could not be found," Yon said.