A Pennsylvania judge reversed the involuntary manslaughter conviction of a woman Wednesday after determining a faulty General Motors ignition switch contributed to her crashing into a school bus and utility pole, killing her teenage passenger. 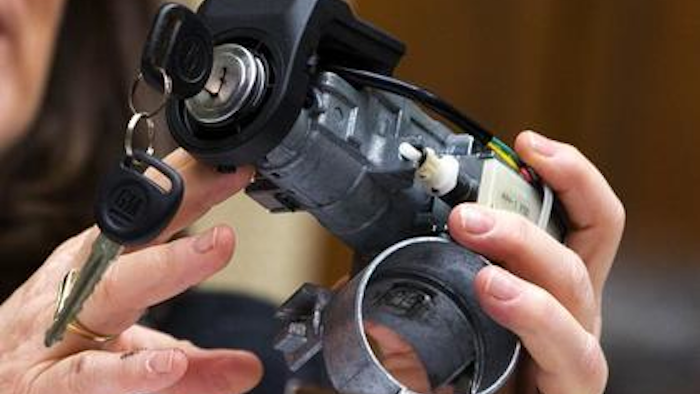 A Pennsylvania judge reversed the involuntary manslaughter conviction of a woman Wednesday after determining a faulty General Motors ignition switch contributed to her crashing into a school bus and utility pole, killing her teenage passenger.

LaKisha Ward-Green, 25, pleaded guilty to manslaughter and reckless driving in 2012. She served three months of a one- to two-year jail sentence before her attorneys appealed, eventually citing the GM defect that resulted in the Wednesday court decision.

Police determined Ward-Green was driving 75 mph in a 35 mph zone when she crashed in 2010 in Penn Hills, the Pittsburgh suburb where she lived. Sixteen-year-old Robert Chambers IV was killed in the crash. He wasn't wearing a seatbelt.

Last year, GM recalled 2.6 million small cars like Ward-Green's 2007 Chevy Cobalt because the ignition switches could unexpectedly turn off, causing the cars to stall, disabling the air bags and power steering and brakes.

Earlier this week, lawyers hired to oversee a $625 million fund GM set up for victims of the faulty ignition switches approved nearly 400 of the more than 4,300 claims filed. Hilliard told The Associated Press that Ward-Green and Chambers' family both received an unspecified amount of money from that fund.

Under rules of the fund, families of those who died are receiving at least $1 million each.

The Pennsylvania district attorney's office could decide to retry Ward-Green, but a spokesman declined to comment on the judge's decision.

The GM fund doesn't account for contributory negligence, which is anything the drivers or accident victims might have done to contribute to the crashes in which the ignition switches failed.

But Hilliard said Ward-Green bears "no responsibility for the accident" despite the police finding that she was speeding,

He said the car's data recorder, or black box, showed she was driving 75 mph five seconds before the crash, but only about 35 mph three seconds later. That's when she swerved to avoid a vehicle, and is when the ignition switch moved, causing her to lose brakes, power steering and air bags, Hilliard said. He said the air bag alone likely would have saved Chambers' life.

"I'm aggravated with GM because had they issued the recall when they were supposed, her criminal defense lawyer would have known about it, and he likely wouldn't have advised her to plead guilty," Hilliard said.