Clinton Plan To Reduce Drug Costs Gets Shrugs From Industry

Hillary Rodham Clinton's plan to rein in prescription drug prices by reshaping how drugmakers do business is being met by skepticism within the industry. 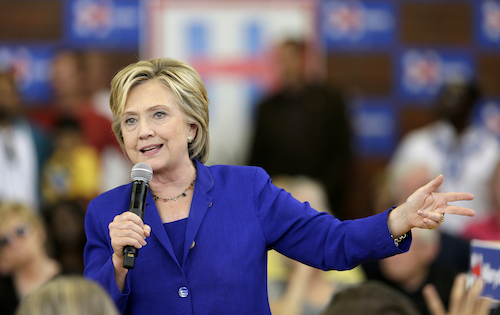 WASHINGTON (AP) — Hillary Rodham Clinton's plan to rein in prescription drug prices by reshaping how drugmakers do business is being met by skepticism within the industry.

Pharmaceutical experts are mostly shrugging off the proposal from the Democratic presidential candidate, which she outlined Tuesday at a forum in Iowa. They point out that some of the ideas have been rejected repeatedly by Congress over the last 20 years.

The Clinton plan includes a combination of proposals long pursued by Democrats, such as cheaper drug imports from abroad and permitting Medicare to negotiate drug prices with companies. It adds some newer ideas, including requiring drugmakers to invest a set portion of profits into research, rather than TV and print advertisements.

The announcement comes amid growing consumer worries about prescription medication costs, which grew an estimated 12.6 percent last year, according to the federal government.

More than 70 percent of Americans think drug costs are unreasonable and favor limiting what drug companies can charge for medicines that treat serious illnesses, according to a recent poll from the nonpartisan Kaiser Family Foundation.

But even with broad public support, industry experts say price restrictions are unlikely to make their way through Congress, which is expected to remain in Republican hands.

"You have to look at this as a rhetorical statement because these are proposals that have been roundly rejected by the Congress repeatedly," said Dan Mendelson, president of Avalere health consultants, who served in the Clinton White House during the 1990s.

Other industry watchers said the plan appeared aimed at neutralizing competition from Clinton's chief rival for the Democratic nomination, Vermont Sen. Bernie Sanders, who has been railing against high drug prices for about a year.

"This appeals to the left wing group that supports Bernie and makes Hillary look like she's a liberal for a few minutes," said Ira Loss, a pharmaceutical analyst with Washington Analysis.

While the chances of Clinton's ideas becoming law seem low, markets still reacted negatively to the news. The Nasdaq Biotechnology Index plummeted more than 3 percent shortly after the announcement, before recovering to close down 1.7 percent.

Here's a closer look at some of the features of the Clinton plan and why experts think they won't work:

One key portion of the plan would require drugmakers to invest a certain portion of their profits into research and development, a direct challenge to some drugmakers who specialize in acquiring drugs from smaller companies and pushing them via billion-dollar marketing campaigns. Analysts are skeptical, however, that Congress could legally direct how companies invest their profits.

"We're hard pressed to think of any industry in which this has ever worked," Raymond James analyst Christopher Raymond, said in a note investors.

Another proposal would place a monthly cap of $250 on out-of-pocket prescription drug costs for patients with chronic or serious health conditions. A number of states have already put in place such limits, including California, Colorado, New York and a half-dozen others.

A separate requirement would curb the amount of money drug companies spend on advertising by eliminating tax write-offs for consumer-directed commercials.

Clinton would support legislation allowing consumers to import drugs from abroad, where they are generally cheaper due to price controls. But efforts to legalize such efforts have been blocked since the 1990s by the powerful pharmaceutical lobby and its allies in Congress, many who are Democrats hailing from states like New Jersey, Connecticut and California.

The Pharmaceutical Research and Manufacturers of America, which represents drugmakers, said in a statement: "These sweeping and far-reaching proposals would restrict patients' access to medicines, result in fewer new treatments for patients, cost countless jobs across the country and erode our nation's standing as the world leader in biomedical innovation."

Another older proposal would allow the federal government to directly negotiate drug prices for millions of seniors enrolled in Medicare, the government health plan for the elderly.

Under the Medicare drug benefit launched in 2006, only private insurance companies can negotiate discounts with drugmakers. Some economists estimate the federal government could save more than $15 billion annually by negotiate directly for all Medicare enrollees, though Congress has repeatedly declined to revisit how the system works.