American Apparel has filed for Chapter 11 bankruptcy protection almost a year after ousting founder Dov Charney, who is now locked in a contentious a legal fight with the retailer. 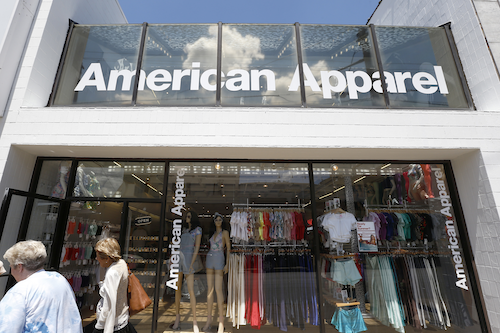 NEW YORK (AP) — American Apparel has filed for Chapter 11 bankruptcy protection almost a year after ousting founder Dov Charney, who is now locked in a contentious a legal fight with the retailer.

American Apparel cautioned in August that it didn't have enough financing to keep operating for the next year and that investors could suffer big losses on their investments.

American Apparel has lost money every year since 2010, with revenue wilting as competition from fast-fashion retailers has increased. The company is being sued by ex-CEO Charney, who was fired in December following allegations that he had violated its sexual harassment policy. Charney denies those charges.

Charney has also filed a $30 million lawsuit against Standard General, one of the company's biggest shareholders, for defamation.

The Los Angeles company said that its U.S. retail stores — as well as wholesale and U.S. manufacturing — will continue to operate. International stores are not affected. American Apparel had approximately 227 retail stores in 19 countries as of Sept. 30.

John Brooks, a former business development manager for American Apparel, said Monday that while it's not a surprise that the company is seeking protection, it will be interesting to see who will benefit from the bankruptcy filing and what the business will look like after.

The chain also said that it will pay all of its suppliers in full under normal terms for goods and services provided on or after bankruptcy filing on Monday.

The plan will wipe out more than $200 million in bonds held by the retailer in exchange for equity interests. Lenders will provide about $90 million in debtor-in-possession financing.

American Apparel's board has approved the restructuring plan, which is expected to be completed in about six months. It still needs approvals from the U.S. Bankruptcy Court for the District of Delaware.