Defying a White House veto threat, the Republican-controlled House on Friday approved a bill to lift a 40-year-old U.S. ban on crude oil exports. Supporters argued that an ongoing boom in oil and gas drilling has made the 1970s-era restrictions obsolete. 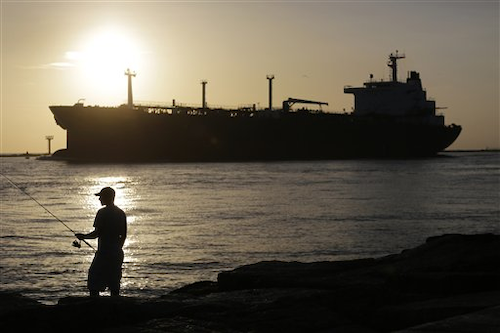 WASHINGTON (AP) — Defying a White House veto threat, the Republican-controlled House on Friday approved a bill to lift a 40-year-old U.S. ban on crude oil exports. Supporters argued that an ongoing boom in oil and gas drilling has made the 1970s-era restrictions obsolete.

The bill was approved, 261-159, with 26 Democrats joining Republicans in backing the measure that now heads to the Senate, where prospects are uncertain.

"In my view, America's energy boom has the potential to reset the economic foundation of our economy and improve our standing around the world," Boehner said.

Rep. Fred Upton, R-Mich., chairman of the House Energy and Commerce Committee, said times have changed and that U.S. policy should embrace a new reality of energy abundance.

"While the (Obama) administration claims to support an all-of-the-above energy policy, their actions don't match the rhetoric," Upton said.

The White House called the bill unnecessary and argued that a decision on whether to end the ban should be made by the Commerce secretary.

Instead of lifting the export ban, "Congress should be focusing its efforts on supporting our transition to a low-carbon economy" and ending billions of dollars a year in federal subsidies to oil companies, the White House said in a statement.

Rep. Kathy Castor, D-Fla., called it "an unconscionable giveaway to Big Oil," while Rep. Frank Pallone, D-N.J., said it would boost annual profits for major oil producers by nearly $30 billion over the next decade.

Rep. Jan Schakowsky, D-Ill., said the bill was not needed as long as U.S. continues to import millions of barrels of oil every day. "Every barrel exported by this bill will have to be replaced by a barrel of imported oil," she said.

The American Petroleum Institute, the oil industry's top lobbying group, said the House vote "starts us down the path to a new era of energy security, saving consumers billions and creating jobs across the country."

The Sierra Club, the nation's largest environmental organization, countered that lifting the ban would lead to a "massive expansion of dangerous oil extraction," from fracking in North Dakota's Bakken shale region to drilling in the fragile Arctic Ocean.