Only Small Number Of Jeeps Fixed 2 Years After Recall Began

Nearly two years after agreeing to recall 1.56 million older Jeeps that could catch fire in rear-end crashes, Fiat-Chrysler has repaired only a fraction of the Jeeps covered by the recall. 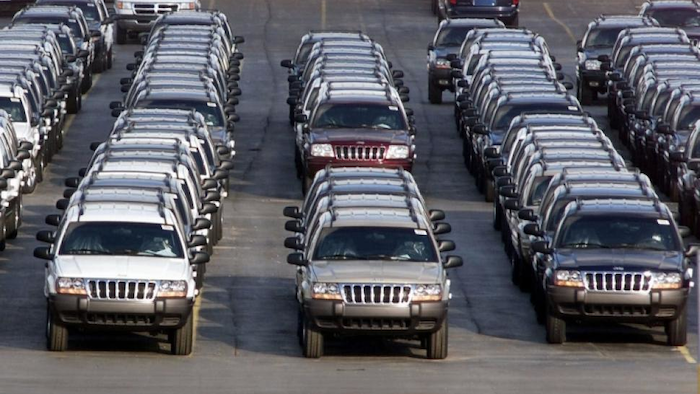 DETROIT (AP) — Nearly two years after agreeing to recall 1.56 million older Jeeps that could catch fire in rear-end crashes, the maker of the vehicles has repaired only a fraction of the Jeeps covered by the recall, according to documents filed with federal safety regulators.

The Jeep repair rate of Fiat Chrysler U.S. is far below the average of 75 percent 1 ½ years after a recall is announced, and it could set up another confrontation between Chrysler, which makes Jeeps, and the government.

The National Highway Traffic Safety Administration has been sparring with Chrysler for more than a year over repair rates for the recall, which involves installing trailer hitches to help protect the Jeeps' gas tanks in a rear-end crash.

The tanks are mounted behind the rear axle and have little structure to protect them if struck from behind. Federal documents show that at least 75 people have died in post-crash fires blamed on the tanks.

"When those show up, we can come out publicly with a few other things," he said without elaborating. "We want to figure out what else we can be doing."

The agency may reopen an investigation into the Jeep fires that ended in June 2013 with an agreement to install the trailer hitches, Rosekind said.

NHTSA has authority to fine automakers a maximum of $35 million if they do not cooperate or finish recalls in a timely manner. But there's no set deadline for completion.

Chrysler spokesman Eric Mayne said in an email that the company has repaired 9 percent of the 1993-1998 Grand Cherokees and 36 percent of the 2002-2007 Libertys. The company's numbers are higher than NHTSA's because Chrysler uses the percentage of vehicles still registered and on the road, while the agency counts the percentage repaired of the total number manufactured, Mayne said.

But in a letter to dealers dated Monday, Fiat Chrysler Automobiles U.S. gave the lower rates. It told dealers that they should make every effort to do the repairs on all eligible vehicles that are in for service, and that the completion rates "have not met expectations." Dealers also shouldn't sell any used Jeeps before recall repairs are done, the letter said.

"If there are barriers that are preventing your dealership from completing these important recalls, please contact your factory representative," the letter said. "FCA wants to know and will make every effort to eliminate any barriers."

Chrysler has contacted customers more than 6.2 million times by mail, email and telephone, asking them to bring vehicles in for repairs, Mayne said. Dealers have 60,000 parts on hand and more than 355,000 are in warehouses, he said.

Chrysler says its analysis of crash statistics shows the Jeeps are as safe as or safer than similar vehicles built at the time. It used that argument to persuade NHTSA to let it recall only 1.56 million Jeeps in June 2013, after the agency recommended that 2.7 million be fixed.

Safety advocates have called the size of the recall and the fix inadequate. Tests by NHTSA showed the hitches help in low-speed crashes of around 40 mph or less, but are of no help in higher-speed crashes.

Clarence Ditlow, head of the Center for Auto Safety, a nonprofit group whose petition to NHTSA touched off the Jeep recall, said the government should fine Fiat Chrysler the maximum possible and called for prosecution of executives for delays.

"This is the recall Chrysler never wanted to do and now refuses to do as required by law," he said.

Earlier this month, a Georgia jury awarded $150 million to the family of a 4-year-old boy killed when a Jeep Grand Cherokee exploded into flames three years ago after being rear-ended. The jury said Chrysler was 99 percent responsible for the crash and must pay nearly the full amount.

Jurors in Decatur County ruled that the company acted with reckless disregard for human life in selling the family of Remington "Remi" Walden a 1999 Jeep with a gas tank mounted behind the rear axle.

Walden, of Bainbridge, Georgia, was killed when the Jeep driven by his aunt was hit from behind by a pickup truck in March 2012. The fuel tank leaked, engulfing the Jeep in flames.

Chrysler is considering an appeal.