Samsung Electronics Co. said its first quarter net profit plunged 39 percent as consumers switched to bigger iPhones, squeezing earnings from its mobile business to less than half what they were a year earlier. 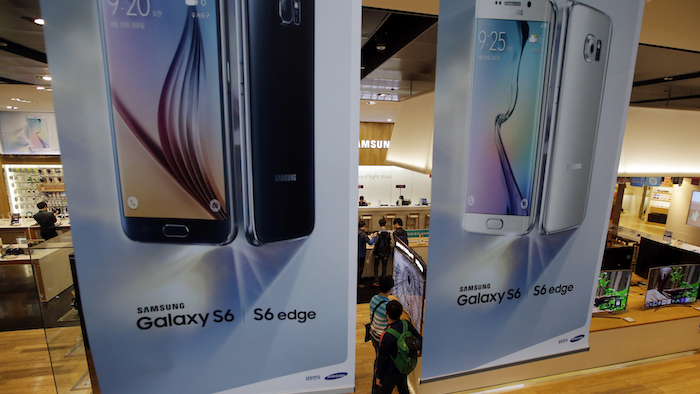 SEOUL, South Korea (AP) — Samsung Electronics Co. said its first quarter net profit plunged 39 percent as consumers switched to bigger iPhones, squeezing earnings from its mobile business to less than half what they were a year earlier.

The company reported Wednesday that its January-March net profit was 4.63 trillion won ($4.35 billion), compared with 7.49 trillion won a year earlier. That was lower than the forecast of 4.97 trillion won in a survey of analysts by financial data provider FactSet.

The larger-than-expected drop was due to a big profit plunge in Samsung's mobile business. The maker of Galaxy smartphones said its mobile division generated 2.74 trillion won in quarterly profit compared with 6.43 trillion won a year earlier.

Analysts estimate Samsung sold more smartphones than Apple during the quarter. But the Korean firm lost ground in the more profitable high-end market to Apple after the maker of the iPhone began offering models with bigger screens last fall. Before that, large screens were a feature that set Samsung phones apart.

According to Counterpoint Technology Market Research, sales of iPhones were also strong in countries where Samsung's presence looms large, such as its home market South Korea and Vietnam, which has Samsung's biggest phone factory.

Apple on Tuesday reported that it sold 61 million iPhones in the first three months of the year, an increase of 40-percent from a year earlier, which drove another quarter of blow-out profits.

Samsung, which does not disclose its smartphone shipments, is estimated to have sold 83 million smartphones during the quarter, down 6 percent from a year earlier, according to Counterpoint. But most of the sales increase came from mid-level handsets like the Galaxy A series, which sell for less than its flagship models. The period preceded the launch of the latest versions of Samsung's flagship smartphones.

The Korean company said its profits will increase during the second quarter as the Galaxy S6, and S6 Edge with a curved screen, expand sales after their global launch this month. But the shipments of those high-end phones will not be big enough to offset an expected decrease in sales of middle- to low-end models, it said. Marketing expenses will also go up, pressuring its profit margin.

The initial sales of the S6 were "great" but the pre-orders of Samsung's new smartphones were "no match to the iPhone 6," said Tom Kang, director at Counterpoint.

Samsung is betting big on the Galaxy S6 series to claw back sales in key markets such as China, where it lost its leading position to Apple and Xiaomi. As part of its push to make new smartphones more attractive, Samsung acquired mobile-payment startup LoopPay this year and introduced Samsung Pay, a mobile payment system on the latest Galaxy phones. The company also introduced new design elements to the S6 Edge phone, which has screens that curve.

Analysts said the improvement in Samsung's mobile profit hinges on how quickly the company can catch up with demand for the S6 Edge smartphones, which cost about $100 more than the S6.

But even then, they questioned if the Galaxy S6 series would be strong enough to stave off competition from the bigger iPhones.

"The shipments of the plain S6 model and the Edge model will be not bad, but it won't be surprising," said Peter Yu, an analyst at BNP Paribas. "What is important is how many they can sell during the second half of this year." Apple traditionally introduces a new iteration of the iPhone in the fall.

The only business that saw an improvement in profit during the first three months of this year was Samsung's component division that supplies chips and displays for makers of smartphones and televisions, including Apple Inc. Samsung's consumer electronics division that makes television sets had a bad quarter, losing 140 billion won.

Looking ahead, Samsung said its overall earnings will increase during the second quarter from the previous three months, as sales of premium smartphones such as its Galaxy series as well as the iPhones drive demand for its semiconductor products and display panels.