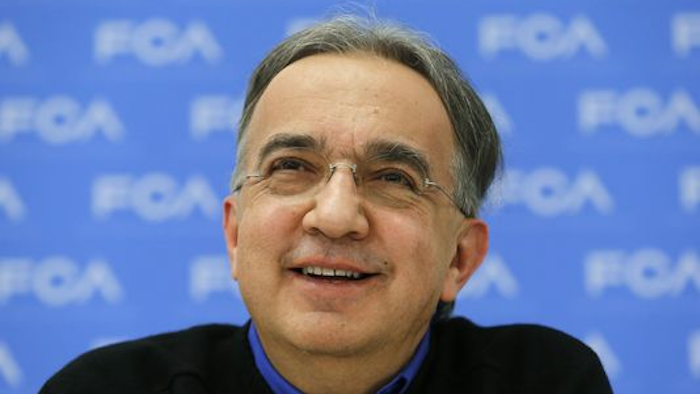 Marchionne has been pitching consolidation lately, and Wednesday he made his case for industry mergers using a 25-page PowerPoint during FCA's first quarter earnings presentation. The company posted first-quarter net profit of $101 million (92 million euros), compared with a net loss of $193 million (173 million euros) in the same period of 2014.

Major automakers spent a total of $136 billion (122 billion euros) on capital expenditures and research and development last year, Marchionne said. That was up from $85 billion (76 billion euros) in 2010.

"We are risking capital at tremendous rates, and the markets are not buying it," Marchionne told analysts and investors on a conference call. "We live in a world of our own. This is incredibly insular."

The main problem, Marchionne says, is that the auto industry spends enormous amounts developing proprietary parts, such as engines and transmissions, that make no difference to the consumer. He estimated FCA could save $2.7 billion to $5 billion each year by sharing product development costs with another automaker.

"It is, in its purest form, economic waste," he said.

Marchionne's petitions for consolidation have so far found no takers among other automakers. He also said Wednesday that he would consider merging with Apple or another tech company.

FCA confirmed its 2015 financial targets Wednesday, including net profit in the range of $1.1 billion (1 billion euros) to $1.3 billion (1.2 billion euros) on worldwide shipments of 4.8 million to 5 million units.

The targets don't take into account any potential impact from plans to spin-off Ferrari, the company said.

Strong sales of the new Jeep Renegade small SUV and Chrysler 200 sedan in North America and modest growth in Europe pushed the company to profit in the first quarter.

North America revenue rose thanks to higher sales volumes and higher U.S. pricing, which helped blunt the negative impact of a stronger U.S. dollar in Canada and Mexico.

Chief Financial Officer Richard Palmer said FCA wants to increase its North American profit margins to 5.5 percent to 6 percent by the end of this year, up from 4 percent at the end of 2014. It expects to do that, in part, with increased sales of vehicles and parts and U.S. price increases.

Europe posted positive results for the second straight quarter as the market continued a slow recovery. European sales rose 5 percent thanks to the new Fiat 500X and the Jeep Renegade, pushing revenue up 8 percent to $5.2 billion (4.7 billion euros).